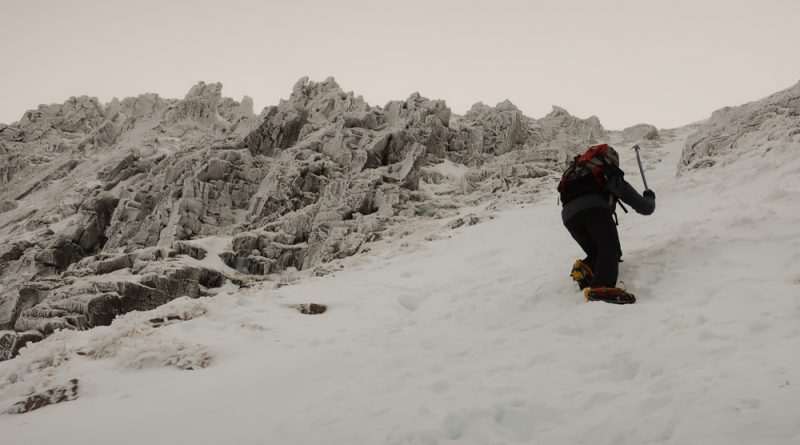 Snow and ice transform Scotland’s mountains into a unique and beautiful landscape but it can also be a somewhat hostile environment.

Looking at the mountain weather forecast as I write, conditions up on the main Cairngorm plateau are predicted to include winds in excess of 100mph – in an area with no shelter from the onslaught.

That makes the 35mph gusts we endured there the week before seem relatively benign, though we still had to negotiate our way over the top of the Northern Corries in what was approaching – but not quite – white-out conditions.

For those who have never experienced a white-out, it’s when you can’t make out the difference between the white of the sky and the white of the snow on the ground, often with the added complication of driving white snow, wind and cold.

The day had started out looking more promising in terms of the weather as we headed out from the ski centre car park – with new goggles in my pack that I’d just bought from the shop at Cairngorm Mountain, my old pair having finally perished after almost 20 years of use!

They certainly came in handy later on.

Peter and I followed the path past the fake snow mounds, being produced to create guaranteed skiing this winter, and below the Northern Corries, forking left at the first junction to head towards Coire an t-Sneachda.

The corrie of the snows is, not surprisingly, one of the best places for winter mountaineering and there were certainly a good number of climbers heading in the same direction as us, kitted out with ropes and other gear.

Our planned route was a mountaineering expedition, but we weren’t planning any proper winter climbing, so our specialist kit only consisted of crampons and an ice axe – an essential requirement for any mountain trip in these conditions.

Approaching the buttresses that rise up to Stob Coire an t-Sneachda, we watched people disperse, looking for the base of their particular climbs – some relatively straightforward, others looking for a real test.

We negotiated the snow-covered boulder field that leads over to the lochans then found the base of the Goat Track, a steep but non-technical climb up onto the plateau that keeps to the right of the main rocky outcrops.

Here we stopped and donned the crampons as well as taking our axes off our sacks, ready for use on the slope. The snow had been fairly soft so far but as we made our way up the steeper slope there was some good neve that made for good, if tiring, progress.

Higher up the gradient steepens and we headed directly up the slope, hammering the axe in and hauling ourselves up, step by step with the points of the crampons. While not being anything like some of the graded climbs in the corrie, the top section was akin to a grade 1 winter climb – especially as I decided to take a beeline for the plateau over the steepest part.

Two climbers emerge from the depths of the corrie having soloed an ‘easy’ route – despite carrying all their kit!

Crampons give extra bite when walking in snow and ice in the mountains.

Goggles on as John and Peter arrive at the top of Cairn Gorm, where another walking has come up from the Ptarmigan restaurant.

The hard work was done as we topped out at the bealach between Cairn Lochan and Stob Coire an t-Sneachda, but the weather up here was well removed from what it had been lower down earlier in the day.

The wind hit us straight away and with spindrift battering our faces it was time to make use of my new purchase, so I got the goggles out and immediately felt the benefit as they kept the ice and snow from battering my face and eyes.

The blue skies of earlier on had also gone and we spent the rest of the day in the cloud, meaning some navigation would be required up here despite the familiarity of the terrain.

A little bit of compass work and some reading of contours was required as we followed the handrail of the cliff edge over the Stob then past the 1141m cairn to Cairn Gorm. Along the way we met a few of the climbers as they popped up from below. Some were fairly local, others had travelled – one group from as far as Lincoln for a weekend of winter climbing while the opportunity was there.

Heading up the last climb to Cairn Gorm it was nice to see the radio mast fade into sight through the cloud, though you could barely make it out from the summit cairn just 100m or so away from it. We decided to take the easy option and followed the line of the steps – marked by wooden posts that once guided visitors using the out-of-action funicular railway to the summit – down to the Ptarmigan restaurant, where we perched outside for a bite to eat before the final descent to the car park.

Our day had been relatively short but was a perfect way to start what I hope will be a great winter season. It gave us an opportunity to get the crampons back on and put the ice axe to good use, refreshing some of the skills required for safe travel in the winter mountains.

Coire an t-Sneachda and Cairn Gorm

A winter mountaineering expedition over the Cairngorms’ Northern Corries