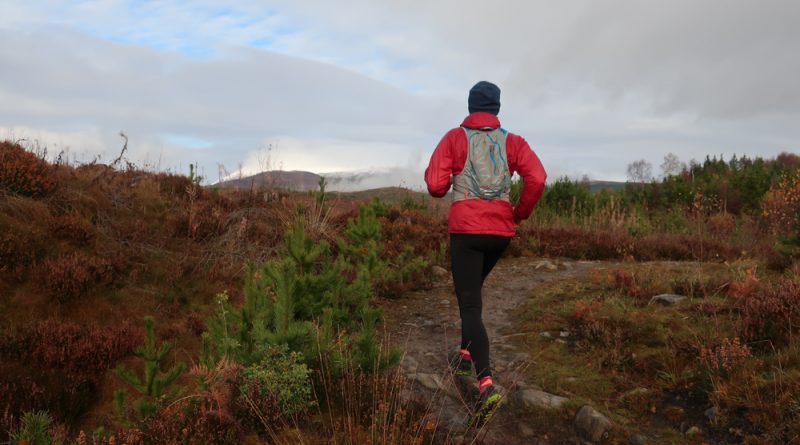 Quiet forest trails don’t get much better than this – but it won’t be long until these particular ones are taken over by two-wheeled trail riders.

That’s because much of this route follows parts of the course used in the Strathpuffer 24-hour mountain bike endurance challenge that takes place here every January in the depths of winter.

In fact, I’d expected to see a number of them out practising and memorising every twist and turn of the route on this cold but clear Sunday morning.

Thankfully, we only saw a handful – and even those were not on the narrow singletrack sections where a coming together could have been hard to avoid!

I had the vague outline of a route in my head as Rich and I set out from the Blackmuir Wood car park in Strathpeffer, crossing the road to follow the track towards Loch Kinellan.

However, I wanted to go a bit further than the basic route and reckoned I could find my way around some of the other unmarked trails, despite it having been nearly five years since I last took part in the Puffer.

After the houses at the end of the lane, we headed left along the peaceful lochside before passing a gate and climbing into the woods.

At a track junction we kept right then followed a wooden sign left to the Kinellan viewpoint. The way goes up a narrow path to join a wider track that then cuts up to the right, where it twists up to a bench – all pretty easy to follow now as the number of bikes using the route in the opposite direction has made it the most obvious way to go.

The viewpoint is a lovely spot, and during the Puffer it’s a magical place to pause in the starlight with the ice and snow sparkling below your wheels – for those of us who don’t care too much about how fast we’re going at least!

We paused for a moment before running down the trail behind the bench, cutting left at the bottom to follow a track then turning right at a junction. A few hundred yards up here, we cut left onto a narrow singletrack section that winds its way through patches of rocky terrain in the forest.

It was peculiar to be running this route, especially in reverse compared to the old Puffer route I know so well. Dropping down to the Bridge of Thighs, the orangey-brown bracken looked beautiful as a contrast to the bare silver bark of the birch trees.

The bridge surface was slippery – no change there – but it was slightly easier to get onto without the hindrance of handlebars. A steep climb follows before the trail bears right, running parallel to a wider track for a short distance.

For the uninitiated, turning the next corner can come as a bit of a shock. I remember coming here for the first time and feeling a bit startled when the bike-riding skeleton known as Bill came into view! Now, he’s a familiar sight, so we said hello to him and continued along the trail, enjoying the view ahead to a snow and cloud-capped Ben Wyvis.

A little more singletrack and we emerged at a hairpin bend on a vehicle track, turning left to drop down the hill and enjoy some easier running. Once we got to Loch na Crann, we decided to get off the main route and instead turned left over a little wooden bridge.

This trail led nicely between the trees and along the loch shore and it was a pleasure to watch its mirror-like surface until the way turned away from the water to meet a clearer path through the woods.

We turned left here, following our noses, and then recognised the next junction, where a signposted right turn took us on the way to View Rock. This stretch winds nicely through the woods, eventually climbing to the viewpoint itself, looking out over Loch Achilty to the Fannichs.

We met a bunch of mountain bikers here, discussing their technical descent from the rock. We stuck to the main path which continues past the rock, then diverted on the old Puffer route, going left then right at the bottom to follow a nice rocky trail that all too soon becomes a mud bath over the race weekend!

The run down here was great fun in parts but as we got nearer the forestry car park at the bottom I decided to add on another loop, so we turned right just after a gap in a wall to reach the forestry track.

A long climb up here followed, and we continued on the main vehicle track until we saw a sign for the River Walk just before a burn. There are some steep drops off the side down here and, with the rocks and roots making for a potentially slippery surface, we were in full concentration mode, Rich making speedier progress than me.

It’s a pleasure to run down this trail though and at the bottom it levels out to a clear path that leads to the Contin Wood car park. From here, we were back on my ‘main’ route, so we followed the lane out to the main road and ran along the pavement through the village of Contin.

Just after the Coul House Hotel and before the filling station, a small path sign points left to Strathpeffer up a quiet side road. We headed up here and continued onto the track it turns into beyond the last cottage, running past Coul Mains under delightfully coloured autumn leaves.

A welcoming sign invites you to take a seat on a carved-out log, but we resisted the temptation and continued along the track, ignoring a couple of turns to keep basically straight ahead where other options sometimes look clearer.

The track leads to the main road opposite Jamestown, where you need to cross over carefully and follow the little road down to a ruined church. Just before this former Free Church, thought to have been built around 1861, a path goes through a little gate to enter the woods.

We ran along this beautiful little trail which leads right back into the car park at Blackmuir Wood, completing a fine circuit on some wonderful mixed surfaces.