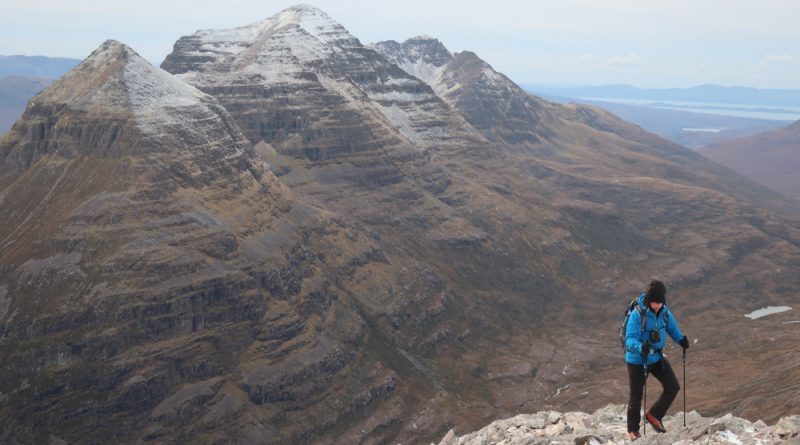 Coire Mhic Fhearchair on the north side of Beinn Eighe is often described as a spectacular amphitheatre but, as well as that, it can also be a cold, rocky, inhospitable world.

It is a place where eight RAF Kinloss crew members lost their lives on their return from a navigation exercise in 1951 when their aircraft crashed on the Triple Buttress near the top of Sail Mhor – hitting the cliffs just 15 feet from the summit.

As we walked through the debris-strewn corrie, decades-old fragments of distorted metal came into sight – first a wing, then a wheel and some unidentifiable piece – telling just a fragment of the story of their untimely end.

By coincidence, Peter and I were walking here on Remembrance Sunday, and I removed my hat as I plodded past these sombre remains of the Lancaster bomber, despite the cold that was infiltrating on this side of the mountain.

Our day had begun with a walk into the early morning sunshine from Glen Torridon, as the southern slopes of this Torridonian giant glowed red in the late autumn light.

Having said hello to the red deer stag that has made itself at home in the car park, we set off up the path into Coire Dubh Mor. The stag may offer the perfect photo opportunity, but I’m concerned that such a magnificent wild creature should behave like this at a time of year when it should be rutting and piling on the pounds ahead of winter. I wonder if he will still be there in the spring.

Up in the corrie, between the imposing walls of Liathach to the left and Beinn Eighe to the right, the path crosses the burn by a series of stepping stones before reaching a fork. We turned right at the large cairn to follow the rough path round the back of Sail Mhor and up towards the corrie.

Looking up to Morrison’s Gully which cuts through the crags of Sail Mhor directly to its summit, we recounted a winter climb from years ago when we’d made our way up this snow-filled chasm before scrambling over the Triple Buttress and headed along the ridge to the Munro summit of Spidean Coire nan Clach.

I’d never been back to climb Beinn Eighe’s other Munro, the outlier of Ruadh-stac Mor, so today’s plan was to head out of the corrie up the scree to reach the ridge and climb that Munro, then follow the ridge to Spidean before descending.

The icy sections of path along with the jumble of rocks in the corrie made it rough going. This is no easy walk and the ascent of the scree chute to the ridge was an interesting challenge in itself – at some points it was a case of one step forward, three steps back!

The sun rises through a split boulder alongside the Coire Dubh Mor path.

Looking down the stone chute to Loch Coire Mhic Fhearchair and Sail Mhor (left) with Baosbheinn and Beinn an Eoin in the distance.

On the way up the stone chute to the ridge.

A spectacular view of the Triple Buttress from the path along the east shore of Loch Coire Mhic Fhearchair.

Part of the Lancaster bomber wreckage which lies among the scree in Coire Mhic Fhearchair on Beinn Eighe.

Eventually we topped out, rewarded with a magnificent panoramic view of snow-capped mountains. We followed the ridge left for a straightforward plod to the summit, albeit while being hit by a chilling wind that soon stripped any heat created through the climb.

Returning past the chute, the ridge continues through a small outcrop that involves some easy scrambling to a cairn on the eastern top of Coinneach Mhor, where we dropped left on easy slopes to a bealach below Spidean Coire nan Clach.

Peter and I were both tired by now, so after making our way through the rocks along the narrowing ridge to the trig point 20 metres below the summit of the Munro, we decided to descend rather than do the extra bit of scrambling to hit the high point.

We had two options for the descent, both of which begin by heading down the spur from the trig point towards Stuc Coire an Laoigh. A path descends left from a large cairn into Coire an Laoigh but I had initially planned a more direct return to Glen Torridon via Coire nan Clach to the right, which follows steep pathless slopes to the valley floor to end up at a ruin across the burn from the car park.

Thinking the path would be the easier option, we headed left and accepted we’d have to also add a two-kilometre plod along the road at the end. However, this badly eroded route was a challenge in itself, especially where ice had covered large stretches and we were forced to follow patches of vegetation to gain some traction.

Eventually the gradient eased and we made the long way down to another car park beside a small plantation of trees, following the road back to the car – and our friendly stag.

Descending Ruadh-stac Mor towards the main Beinn Eighe ridge, with a spectacular view of snow-capped mountains for miles around.

The Beinn Eighe ridge and Liathach beyond.

Walkers heading towards the summit of Ruadh-stac Mor on Beinn Eighe.

Looking up to Spidean Coire nan Clach on the Beinn Eighe ridge in the early morning sunlight.

Peter heads up the rocks on the way to the east top of Coinneach Mhor, with Ruadh-stac Mor behind.

Reaching new heights on one of Torridon’s finest mountain ranges