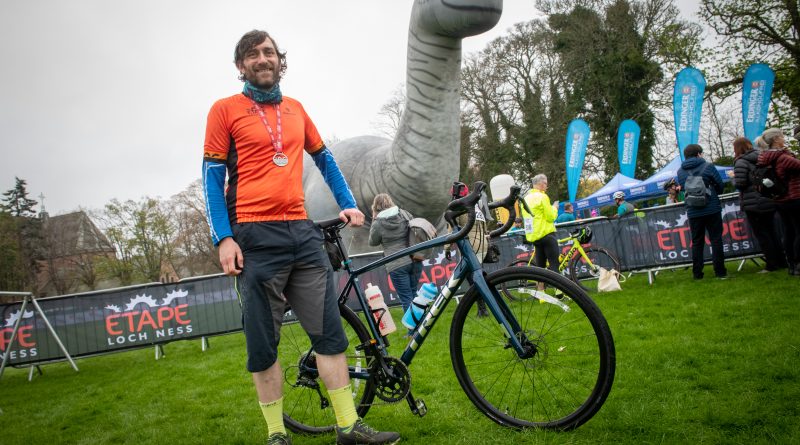 The water was mirror calm as a record number of riders took on the Etape Loch Ness last weekend. I was among them once again as we gathered at the start after a very early rise.

The cycle sportive begins at 6am, with riders setting off in waves, and after posting a pretty fast time last year on a friend’s carbon fibre bike, I was already on my way by 6.10am.

Last year’s event – which took place in August instead of the regular April date – inspired me to finally invest in my own road bike instead of the heavier touring bike I’ve always used in the past. Carbon Fibre was a bit out of my price range, though, so I settled for something a bit more ‘entry level’. And while I didn’t beat last year’s time, I did post my second-best time of just over 3 hours 50 minutes.

I’ve done this event every year since 2014 when it started – apart from 2018 because it was not long after my youngest child was born and I was not entering every event under the sun that year!

One of the best things about the Etape, for me, is being able to enjoy the freedom of riding the A82 down to Drumnadrochit, Invermoriston and Fort Augustus without any motor traffic to worry about. It’s a fantastic road but is not good for cycling on any other day of the year.

The early start and cool conditions showed the loch in an interesting and atmospheric light, and at times I was captivated by the view – one you don’t get chance to look at properly when driving this route.

Before I knew it, we were crossing the canal at Fort Augustus and preparing for the King of the Mountain stage up to the Suidhe viewpoint. Knowing this five-mile climb well is a definite advantage and I enjoyed making my way slowly up to hear the skirl of the pipes at the top.

Unfortunately, the timing device didn’t work for most riders at this year’s Etape, so I didn’t get an official time for this stage, though I suspect it wouldn’t have been quite as fast as last year either!

A fast descent through Whitebridge follows before a couple more hills into Foyers, then it’s an undulating ride along the loch-side to Dores. There was a very slight headwind along here this year – unusual for the predominantly southerlies you usual get – which made it just that little bit slower.

The support along the route was great – it always gives riders a real boost when we get an enthusiastic cheer as we head through the villages on the way round. It was the same as we returned to Inverness, with people out and about from the bottom of the Ness Castle hill and at the Holm roundabout – the one with Nessie on it.

It was getting a little damp by the end, with a bit of fine drizzle putting a sheen on the road surface, but it was otherwise perfect conditions for cycling.

The finish beside the cathedral in the city centre is a welcome sight after an early morning 66-mile loop of Loch Ness, and the event hub at the Northern Meeting Park had a great atmosphere with spectators and families allowed in to welcome back riders this year.

It’s great to have that feeling of normality back as well as to see so many bikes out and about in and around Inverness.