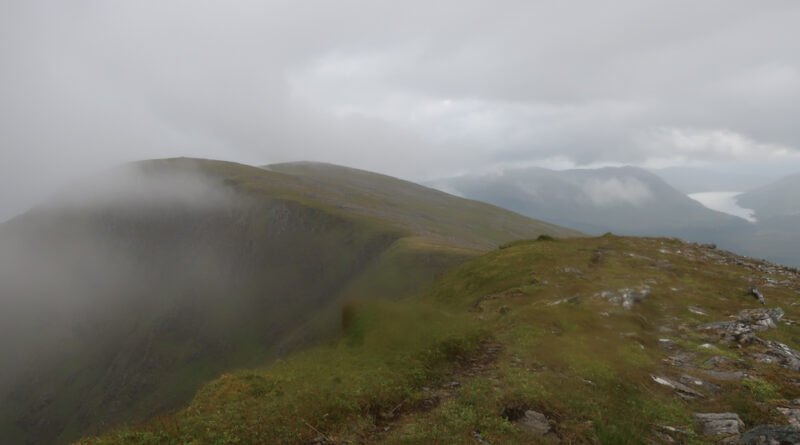 Coire na h-Uamha – the corrie of the cave – is the most striking feature of these two hills, according to the Scottish Mountaineering Club guide to the Munros.

Unfortunately, that steep corrie wall is probably better seen from Creag Meagaidh than from the circuit that takes in the two summits of Beinn a’Chaorainn and Beinn Teallach. But as Hamish Brown so famously observed, there are no dull hills, only dull people.

Thankfully, as I made my way up the vague south-west ridge of Beinn a’Chaorainn there was plenty to keep the interest, from the views back over Loch Treig to the abundance of montane flowers at my feet.

I’d started at the forest gate at Roughburn, a little way east of Roy Bridge on the A86. Aiming for less popular hills in this post-lockdown world, I was surprised by how many cars were gathered there and in the nearby lay-by. That’s what I get for setting off late after a busy week, I guess!

After about 1km of forest track, a junction is reached where I headed left among the plantation forest, which is now mostly stumps of grey, lifeless remnants. A little cairn less than 100m down this track offers a shortcut onto the hill, which I followed directly upwards through a narrow standing of trees, which seemed to be holding out from the chainsaws.

A little path of sorts heads initially directly upwards as it makes its way between the densely populated trunks to reach a fence. I crossed it by what remains of a high stile – easily climbed but somewhat trickier to descend with no top platform and missing rungs on the other side.

With that obstacle out of the way, it was a case of climbing steadily around the western shoulder of Meall Clachaig then following the slope up to a flatish area. I stopped here for an early bite to eat, sheltering from the breeze before aiming for a spur that bends right higher up to reach the south top of the mountain.

Everything seemed to be in flower in this boggy tundra, from crowberry and cowberry to bog asphodel and ladies mantel. Cloud was shrouding the top of the hill as I climbed up to the 1049m top, marked by a small cairn.

Heading roughly north from here it is an easy stroll to the summit of Beinn a’Chaorainn, and I caught a glimpse of the summit cairn as the cloud started to drift over the ridge.

This first part of the day had been a bit of a slog so I sauntered along and spent some time at the top, then continued as the ridge narrows a little – though not particularly dramatically – along the edge of Coire na h-Uamha.

There is a cave marked on the 1:25,000 OS map at the bottom of the Allt na h-Uamha, but whether there are other caves in the corrie itself, I’m not sure. You certainly get a good view of the drop into the corrie and a small lochan high up in the corrie looked like an interesting place to explore – perhaps another day.

Beyond the lower north top, I met a walker coming up from the bealach. He had camped out the night before on the ridge of Beinn Teallach. When I asked how the night had been, only two words seemed to emerge – boggy and midgies.

As I continued my gradual descent towards the Tom Mor bealach, I was captivated by the view to the east, showing the back of Creag Meagaidh and The Window which gives access to Coire Ardair. I spent a fabulous night out up there as part of my Mountain Leader training in 2018, including some night navigation training on one of the clearest night’s you could imagine!

Looking ahead, I could see through to Glen Roy and the Parallel Roads, while closer by the top of Beinn Teallach came and went as cloud began to gain a stronger grip on the 915m mountain.

After crossing the boggy bealach, I made my way up steep, wet slopes to gain the ridge and found a reasonably worn route through the various rocky outcrops that make up its north-east ridge.

The cloud clung on as I made my way up to the summit cairn – there are two cairns up here, one a little further on after a dip; while that looks higher, the map suggests the first one you reach is the Munro summit, though I visited both just to make sure!

The descent from this hill, which was promoted to Munro status after a survey found it was around 20cm above the 3000ft mark (if you’ll excuse me mixing my measurements), is long and rough, crossing huge slopes of deer grass and heather.

Once under the base of the cloud, I aimed for the corner of the forest – which was another small remnant that has survived felling so far – and looked for the path that follows the burn between the two Munros. I found a gate close to the forest and went through, but the path was little but water that had been driven over by an argocat, by the looks of it.

Avoiding the worst of the bog, I followed it all the way down to the confluence of burns and found an easy place to hop across. This isn’t always possible, and many guidebooks suggest when the burn is in spate, a trek back up the glen is necessary to find a safe place to cross. With no such problems today, I headed up to an open gate that leads back into the forestry area, and followed the track back to the junction 1km from the roadside at Roughburn.