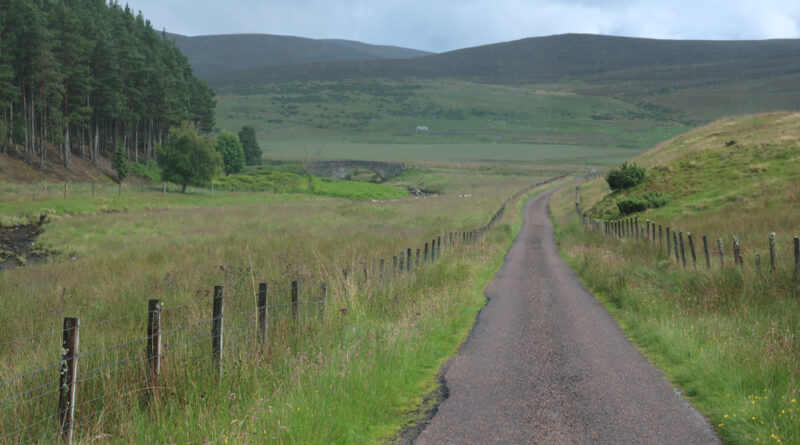 Lockdown gave us all a chance to get out and explore more from our front doors, and it reminded me that you don’t always need to travel to find some great routes.

While I’m delighted to be going further afield now, I’m also revisiting more routes close to home that tend to be bypassed on the hunt for ‘something new’.

On the bike, I kept those lockdown rides relatively short – usually around 15 to 25 miles – but this route is one that I’d wanted to build up to again. It climbs out of Inverness and over the northern edge of the Monadhliath hills on a wonderful single-track road that leads into Strathdearn.

Before getting to that big climb, however, I wanted to warm my legs up, so I took the easy ride towards Dores, following the Caledonia Way cycle route down the Torbreck road from the south side of Inverness and on to Scaniport.

This little tootle down to Dores certainly increased in popularity during lockdown, and there were plenty of cyclists out as I made my way along the quiet back road to a T-junction at Darris. Taking a left turn here, leaving the cycle route behind, I climbed the MacBain hill as it zigzags up to the crossroads near Loch Ashie.

My legs were certainly warmed up after that, but the more testing climb was still to come as I headed straight on, enjoying the freewheel to skirt the edge of Loch Ashie before continuing on to the woods around Loch Duntelchaig.

These roads are beautiful for cycling, winding their way around the very edge of the water, with mature trees overhead and little accesses to the water’s edge here and there. Through another section of woodland and you reach Loch a’Chlachain, where the road really does hug the shore.

Soon I passed the old church at Dunlichity, where it is said that Jacobite soldiers sharpened their swords on the way to Culloden in April 1746; you can still see the marks on one corner of the old wall inside the grave yard.

Looking roughly south-east from here, I could just make out the tops of some of the turbines spinning away in the distance. Where recently I would have been thinking about returning to Inverness, I was now ready to venture further afield and make my way up there.

Continuing straight on along the road at Dunlichity, in just over a mile I took the right turn signed to Farr, which leads over a stone bridge then up past a little collection of houses at Tordarroch. This soon reaches the B851 and I turned right onto that road through Farr, looking out for the left-turn to Garbole after another mile or so.

This is the start of the big climb over the Monadhliath and it starts gently enough. Passing Loch Farr, a woman was swimming in the wild but mild-mannered water as another was sitting on the bank reading.

Thereafter, it gets tougher and the hard work began as I pedalled past a pylon and crossed a wooden bridge over the Allt Beag and then a cattle grid before the steep ascent hit again. I had already been overtaken by a strong cyclist, and there was another one further ahead on the hill who was soon caught by the speedy rider.

I trundled up the hill, battling not only the gradient but also the elements as the heavy rain showers came and went, and then came and stayed. The turbines of the Farr wind farm remain fairly distant from the road, with the electricity cables mostly between you and them, though it is possible to get off road and cycle the tracks among them on the right type of bike if you are so inclined.

The climb continues across the moor, peaking at 463m above sea level, before an exciting ride along the edge of a deep gorge into Glen Kyllachy – protected by motorway-style crash barriers. The rain was hammering down here but as I began the descent the sun did its best to come out, and I enjoyed the zigzags down through the woods and out to Garbole, watching out for a couple of rough cattle grids off to the side where the road is blocked by gates.

Arriving at a T-junction in Strathdearn, I headed left to cross the bridge over the Allt a’Mharcaidh and follow the line of the River Findhorn into Tomatin. Meandering down this pleasant stretch, I saw the cyclist I had seen ahead of me earlier stopped to change her jacket – then realised it was a friend of mine!

Hammering on the brakes, I pulled up alongside and we rode the next stretch together, taking a left turn into the village at the Findhorn Bridge then continuing past the distillery and going straight on to follow the cycle route where the main road goes right to meet the A9.

This excellent little section goes past a few houses then drops onto a surfaced cycle path just after one of the lay-bys on the trunk road. The path stays well away from the busy road until you arrive at another lay-by, following a protected cycle lane at the back of it. However, you must cross the A9 here to reach the path on the far side, which continues left to reach the B9154 into Moy.

On reaching this road, turn right and follow it round a left-hand bend into Moy. My friend was detouring to the loch here, so we said our goodbyes and I continued solo out of the village and under the railway line, passing a couple of lochans then dropping downhill at Auchnahillin.

You can follow the cycle route back to Inverness from here, turning right to go via Culloden and Smithton, but I opted for a more direct return route, so continued on the B road to the war memorial, turning left here and following the long road that reaches an underpass, which cyclists can use to head below the A9 and emerge on the B851 which then continues towards Inverarnie.

At the shop here, I turned right for Inverness, heading over the River Nairn then up to the crossroads at Balnafoich and straight on past Tomfat Woods, across the moor and down a fantastic descent back into the city.