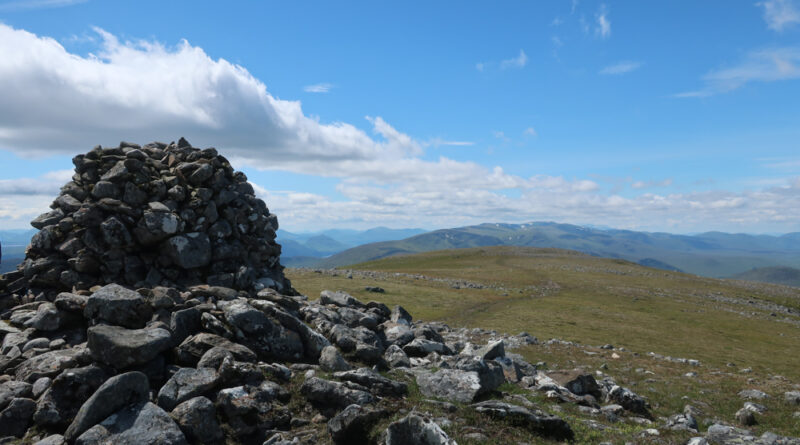 Snow in July – and we weren’t even in the higher corries of the Cairngorms. Across the A9, the Monadhliaths, translated as the grey hills, have a lesser reputation for grandeur as well as for ice and snow.

Yet here, in this corrie sculpted by the stuff, were the substantial remains of a snow patch, in decline but not quite defeated by the soaring summer temperatures.

Peter couldn’t help himself; he marched straight across the middle, reconnecting with our last Munro outing over there on Cairn Gorm in the depths of winter.

This day couldn’t have been much different, though. Blue skies, birds, flowers and frogs all greeted us today, as we made our way up the first Munro of the year; a far cry from that cloud-covered day over the Northern Corries in December.

Geal Charn may not have the same obvious attraction, but after much pondering over the map we worked out a way to make the most of the mountain’s best features.

It involved some logistics, meaning I dropped the car at Garva Bridge then cycled back along the winding, single-track road that connects Laggan to the Corrieyairack Pass, to meet Peter at the starting point, Spey Dam.

There is a bit of an industrial site here at the moment with a substation being constructed at Melgarve and massive access tracks cutting across the bottom of the hillside, but nothing was happening in that regard on this quiet Sunday morning.

We headed north up the track into Glen Markie, admiring the view west over Creag Meagaidh as the route took us deeper into the hills. After a couple of miles, the track ends at a ford just beyond a turning circle, from where a path continues well above the water.

Every route guide we read beforehand suggested crossing the Markie Burn just beyond its confluence with the Piper’s Burn, which pours down from the lochan in the mountain’s eastern corrie. The crossing is said to be impossible in spate, and the huge boulders brought down by the burn in the past were testament to that.

The usual way from here is to climb the slopes onto the corrie rim, avoiding any difficulties by keeping east of the last crags.

However, as usual we had our own ideas and decided to cross early, before the Piper’s Burn, the water level being low today and offering us plenty of choice where to get across.  We skirted across the hillside, gaining height, to meet a line of rusty fenceposts just before the burn, which has a series of waterfalls higher up.

There was plenty to see as we made our way up towards the corrie, with bog myrtle, bog asphodel, heather, cloudberry and bell flowers among the plants on show, while a curlew made its presence known as it launched into the sky.

At one point we passed an old gate on the fenceline, still secured with some of the tangled wire, while we had to cross a newer fence, which was easily done without damage.

The gradient eased as we approached the corrie, its craggy headwall becoming more and more apparent, and eventually the shiny water of Lochan a’Choire came into view ahead of us. It was tempting to take a dip but I settled for walking along the southern edge to take a lunch break below our intended ascent route.

A north-east facing gully pierces the corrie, leading up to Uinneag Coire an Lochain – the window on the corrie of the small loch. Despite its name, we discovered that the lochan isn’t visible from the bealach, though it does provide easy access up or down on grassy slopes.

After an initial steep, wet section, there was one short section of rocks that could be easily avoided to the left before the gradient eased until the last few metres, where our little snow hollow was found.

Emerging onto the summit plateau, the wind hit us as we turned to the north to head for the large summit cairn, which is set well back from the edge of the corrie rim. Beyond the summit, turbines from the vast collection of Monadhliath wind farms greeted us, spinning away happily in the gentle breeze today.

But taking in the panorama was bliss; from nearby Creag Meagaidh to the Sutherland hills, Ben Wyvis and so much more, it was breath-taking. We spent some time here at the top, enjoying our return to the mountains, before picking a descent route.

We considered going over nearby Beinn Sgiath and returning along its south-west ridge to Meall an Domhnaich and then down to Garvabeg, but in the end opted for a descent of Geal Charn’s own south-west ridge.

This is the quickest – but surely least inspiring – route up Geal Charn, and we met a number of people trudging up the path, such as it was. As a descent route, however, it gave us the benefit of admiring the view over Garva Bridge to Loch Laggan and the hills beyond.

There is little in the way of a path as you head down, until you reach the Féith Talagain at its confluence with the Allt Coire nan Dearcag. From here, we crossed the latter burn and picked up a decent stalkers’ path that follows the Féith Talagain on its eastern bank down to Garva Bridge.