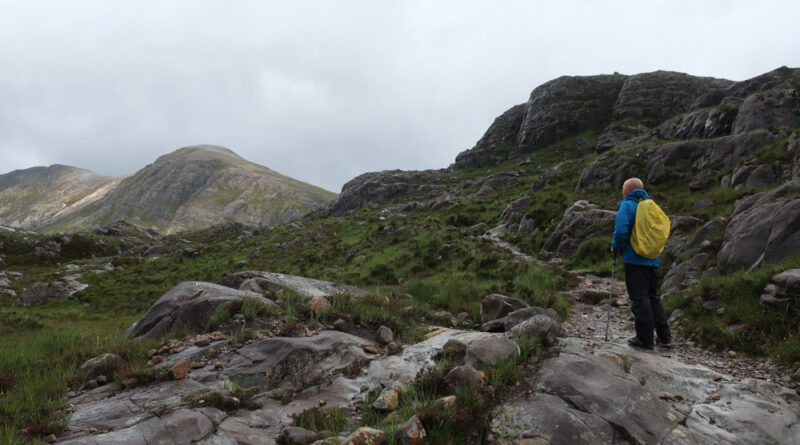 After months in lockdown, John Davidson makes the most of the easing of travel restrictions with a fine walk into the hills

It’s good to be back. After four months in lockdown, we finally got the green light to travel more than five miles for leisure, meaning the mountains were within reach once again.

The only problem was the weather forecast. The first weekend of freedom and heavy rain with gale-force winds was on the cards for the high tops. Welcome to the Highlands!

The pull of the mountains was too strong, though, but instead of heading for a summit, a lower-level walk that would take us close to that beautiful high country would be the sensible compromise – especially after months without serious walking.

The paths around the wider Torridon area offer some great outings into the hills without needing too much focus on navigation, except in particularly poor conditions, so we opted for this fine little circuit from the railway station at Achnashellach.

There’s limited roadside parking opposite the dilapidated red phone box – a small car park up at the station itself is for railway customers only – and, sticking to the coronavirus guidance, Peter and I arrived in separate cars.

After waving hello through the car windows, we sat and waited as the rain hammered down for 20 minutes before it even considered easing. Still, it was already nice to be somewhere new after so much time at home.

I got into the boot of the car and donned the waterproofs and boots, ready to get going, once the rain had stopped bouncing off the tarmac.

Our route leads up the track by the phone box and over the railway, following this surfaced track up to a crossroads. There is a sign hidden somewhere among the trees, but we both know the area well enough that we didn’t even look at the map on this outing.

We took the left turn, following a forest track through the trees until a path cuts off to the left a little way up. We followed this towards the Allt an Leth-chreig, going through a gate to find ourselves beside the fast-flowing water pouring off the mountains above.

The excellent path continues through the woods, crossing a footbridge at one point, before emerging onto the open hillside near an old, broken estate sign.

Through the murk we could make out the shape of Fuar Tholl, a complex Corbett with sheer cliffs on many sides, and further ahead the long ridge of Beinn Liath Mhor, higher still and claiming Munro status.

The climb up to Coire Lair is excellent, a fine path twisting its way over rocks and earth as more of this magnificent view graces your eyes. A number of large cairns mark various ways deeper into the mountains from the entrance to the corrie, the first leading the way up to Fuar Tholl, the next into Coire Lair itself and another one towards the steep climb onto the Beinn Liath Mhor ridge.

We lingered here, admiring the scenery that our senses had longed for so much during lockdown; the sandstone terraces of the cliffs, the scree and rock, mountain flora in perfect bloom, that long path reaching deep into Coire Lair to the bealach between Beinn Liath Mhor and the other Munro close to hand, Sgorr Ruadh.

As we continued, we saw a couple of red deer. They watched us from not too far away but showed no sense of urgency to get away; perhaps the quieter mountains have changed their outlook too. Further on, a stonechat, hopping from one spot to another among the heather.

Keeping right at each of those cairns, we continued along the well-made path over the Drochaid Coire Lair and fording a number of burns until we dropped to the Easan Gael, where a footbridge provides a view of a magnificent waterfall. Last time I’d been here we’d swum – albeit briefly in my case – in the pool below, but today the fall was a torrent and there was no such temptation.

The Teahouse bothy lies just down the path from here, with its bright green roof conspicuous even during the summer bloom. We ducked inside to shelter from another long-lasting heavy downpour, which happily coincided with our lunch break.

Once we emerged, it was to a different world. The sun was shining as we made our way down the grassy track, which soon merges with an upgraded track now serving a hydro station further up the glen. We saw more deer in the woods across the Easan Dorcha, drinking from the edge of the river.

Turning right, we crossed the single-arch bridge that goes over the river and began the long climb over the Coulin Pass. The gradient is fairly gentle and the route follows a good track all the way from here, so we enjoyed taking in the view. Behind us, cloud was lifting off Beinn Eighe, providing a dramatic backdrop to our walk.

Just after the high point of the pass, the route goes through a large gate then drops across the face of the steep slope back to Achnashellach, with Loch Dùghaill prominent in the valley below. We stuck to the track where another right of way is signed to Craig through the trees, and crossed a couple of newly laid metallic blue steel bridges on the descent.

At the crossroads of tracks, we headed straight on to cross the railway and head back to the road, filled with satisfaction at the experience of having been back in the mountains, at last.