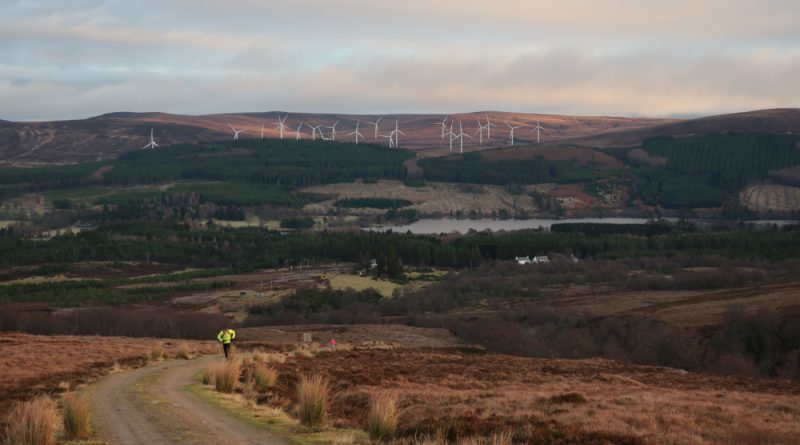 Love them or loathe them, there’s no getting away from them up here – and on a day like this it was easy to see why.

Even in the apparent shelter of the trees at the bottom of the road, the cold wind was ripping through my layers of running gear. There was nothing for it, it was time to get moving.

I left the car at Lynebeg, signed off the A9 between the two Moy junctions south of Inverness. After turning off the main road, go over the cattle grid then turn left, where there is plenty of space for parking beside the old road.

Setting out along the tarmacked road, gloves and hat well and truly on, I passed a few cottages before reaching the fenceline onto the moors above. A small group of runners were gathered here ready to tackle the short but definitely sharp climb to Carn na h-Easgainn and back down again.

My plan for the day was something a little more adventurous. I was heading for the trig point at the 616m summit too, but then I would continue along the ridge using the well-connected vehicle tracks before descending into Tomatin and returning via the cycle path.

Crossing the cattle grid and heading upwards, the track dips to ford a burn – the Allt na Loinne Mòire – before climbing more steeply. It’s a pretty direct ascent to the summit, so with the wind doing its utmost to slow me down as well, I was forced to walk on a few occasions.

No harm done – with more than 300m of climbing to be done in the first 3km of the run, it was never going to be a speedy start!

Looking back as I paused to catch my breath, the turbines across the glen at Moy dominated the scene – but not as much as those right in front of me. Farr Wind Farm consists of 40 turbines, with a combined capacity of 92MW – enough, so the operator claims, to power more than 58,000 homes for a year.

It’s no wonder the Monadhliath are a magnet for wind farm developers. All the turbines were spinning today in what the energy firms would probably call perfect conditions. With my hood wrapped over my hat to keep it on, I’m not sure I would use the same description!

I hunkered down in lee of the trig point to take in what I could of the view. Cloud was obscuring it to the north but to the south and east it was fairly clear, with the sun even coming out sometimes to brighten these barren moors.

The lack of trees in these hills is stark, but it’s not for want of trying. Hidden in a little gorge further on, juniper and birch aplenty were growing, out of reach of the deer and away from the muirburn which allows the grouse to thrive, for a short time, at least.

I turned left at the junction next to the trig point, not wanting to hang around in this heat-sapping breeze. You pass another track which leads right, into the wind farm and beyond to Farr and Inverarnie – giving plenty of options not just for running but for gravel cycling too.

I carried straight on, descending now. My route plan had me cutting this drop and re-ascent out and sticking closer to the high line, but the horrible peat hags didn’t look conducive to good running so I opted to stick to the track, dropping to the next junction then turning right to climb back up and loop round the back of Carn Mòraig.

A rather fancy looking ‘bothy’ has been built beside the track here, with a fabulous outlook to the south over the main Monadhliath range through its sliding glass doors. I don’t suppose this one is for public use, though!

A steep descent was good fun now as I caught sight of the distillery ahead. I dropped to another ford then had to cross a large patch of snow – you’d expect there to be lots more about in the middle of winter but the mild weather had removed most of it when I was here. Perhaps it will be back by the time you read this, which would make this outing an altogether different proposition.

One more rise led over Carn a’ Bhothain Duibh to another junction in the track, this one beside an older green shelter. It was time to head off the hills for the next phase of the route and it was with a heavy heart I left the moors behind, turning left to run parallel to the Allt na Frìthe – the burn which Tomatin Distillery uses to produce its rather pleasant uisge-bheatha.

Another runner was heading uphill as I descended and we said a quick hello as we passed, me concentrating on my foot placements as I picked up speed. The track bends left then takes a sharp right to drop to the corner of a forestry plantation.

There are route options here and perhaps in hindsight I made the wrong decision, but my route went right then left into the forest, emerging on a road where I turned right to reach the distillery grounds. Turning left at the end then keeping left to pass under the railway, I reached the Tomatin road and followed a nice little footpath set back from the tarmac which is signed to the A9 bus stop.

I followed those signs until I could see the bus stop down to my right, but then continued on the back road which makes up the cycle route. After the houses it continues above the road then forks right onto a tarmacked path which follows the line of the A9, albeit tucked back from the busy traffic, thankfully.

It emerges at a layby, which is where I realised that I could have extended the off-road part of the route by turning left at the corner of the plantation. Crossing the burn there and following the track would have taken me over the bealach below Tom na h-Ulaidh to reach Dalmagarry, avoiding any tarmac until this point.

I could also have turned left instead of right where I came out of the forestry, cutting out the loop through the distillery and onto the cycle route.

However, I was here now, and the next step was to cross the A9 safely to reach the cycle path on the far side. This leads along to the most southerly of the Moy junctions, and I turned right to follow that road into Moy.

For about half a mile this involves running on the road itself but a whin-dust pavement has improved this stretch further on. After passing the sign for Moy, I headed across the road at the bus shelter and community notice board – where there’s also a sign for the old military road to Inverness.

Follow this under the railway and up an old road to reach the A9, where you have to cross very carefully again – especially as this crossing point is near the end of an overtaking lane in one direction.

Safely across, it was just a short jog back to the car, where the trees were still rocking – and no doubt the turbines higher up were still turning – in the wild Monadhliath wind.