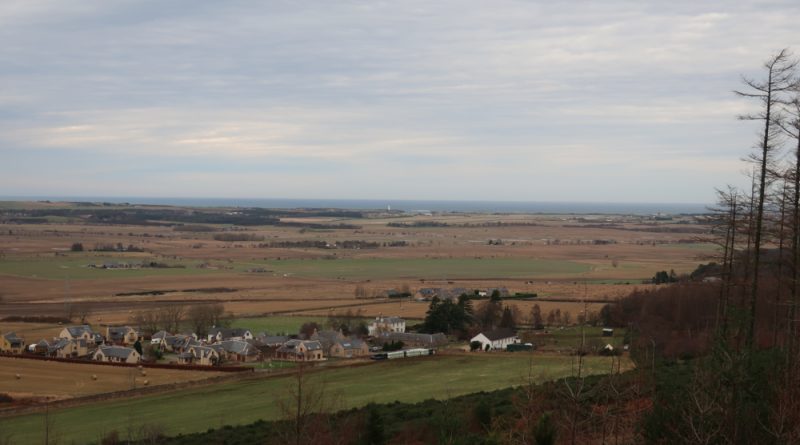 Elginia mirabilis. This rather exotic sounding creature was buried in the sands of time here, a stone’s throw from today’s cathedral city of Elgin.

It’s hard to imagine this 250-million-year-old reptile strutting its stuff in what is now a remarkably peaceful forest to the west of the town.

The spiky dwarf pareiasaur was about the size of a Labrador and some of its fossil remains can be seen in Elgin Museum, along with other fish and reptile fossils from Cutties Hill within the woods.

The fossils were unearthed thanks to a series of sandstone quarries in the woodland that give the place its name of Quarry Wood or Quarrelwood.

You can reach the woods from the edge of town but, as I was out on the bike, I detoured to the Leggat car park, at the western edge of the wood, to start the waymarked trail.

Older stone waymarkers with the creature’s replica fossil footprints guide you along the Elginia Trail, though in truth it’s easier to follow the red waymarker posts Forestry and Land Scotland have put up more recently.

The route starts by going slightly uphill along the clear track past the gate. Keep ahead on the track where a red marker can be seen down a path to the right – this is the return route if you do the circuit clockwise as I did.

Not far into the walk a red post diverts you left off the track to reach a viewpoint, where there’s a trig point, bench and information panel set into a boulder. The outlook is over the Laich o’ Moray, a vast low-lying area gradually reclaimed from the sea over the last thousand years or so.

You can look out to Burghead, Hopeman and Lossiemouth, over the RAF base and you can even make out Covesea lighthouse just beyond.

Back on the track, the route continues around a left-hand bend then veers right to a mixed junction – keep following the main path round to the right here until you see the second red marker post leading you down a nice little path through the trees.

From here the walk is especially pleasant, soft underfoot (but thankfully not too soft) and with a peaceful air about the place. I could listen to the birds in the trees and it felt a million miles from civilisation, despite me having seen plenty of other folk out and about.

There are so many tempting trails darting off to the left and the right, but I was content this time to stick to the waymarked route – noting the potential for more exploration, particularly for trail runs.

There is also great mountain biking to be had here, as well as a fixed orienteering course – with the map available from the local orienteering club, Moravian.

I followed the markers as the path led to a sharp left turn then a sharp right, emerging at a small pond beside one of the orienteering posts. A bench with a picture of Elginia mirabilis on it offers a place to rest and ponder here.

A narrow path full of roots continues straight ahead past the pond, leading to an open area on the left. This is a huge Neolithic henge whose purpose is lost in time. You can wander into it today, and clearly see the ditch that goes around the entire circumference; a fascinating place that once would have been of great importance to the community.

The path now moves right, away from the henge, then left to reach a track junction. Follow the repaired path round to the left here to continue, heading downhill through the trees. A fence ahead marks the edge of a huge drop into one of the disused quarries, the tops of the trees jutting out above the top of the sandstone cliffs.

A well-made path soon drops in a straight line, offering another vantage point – this time to the south – as it makes its way past a few smaller quarries then rises to meet the track again, a short distance from the Leggat car park.

Overlooking the Laich o’ Moray from the viewpoint near the start of the trail.

The 127m trig point in Quarrelwood beside the viewpoint.

A bench and information panel at the viewpoint.

A series of excellent trails wind their way through the woods.

A depiction of the Elginia creature on one of the benches.

A little pond with an orienteering marker beside it makes a nice focal point on the walk.

The ditch of the old henge is clearly visible striking round to the left in this image.

A well-defined path heads downhill along the edge of Quarrelwood.

Bench overlooking the trees on the way back.

John on a stroll through the woods.