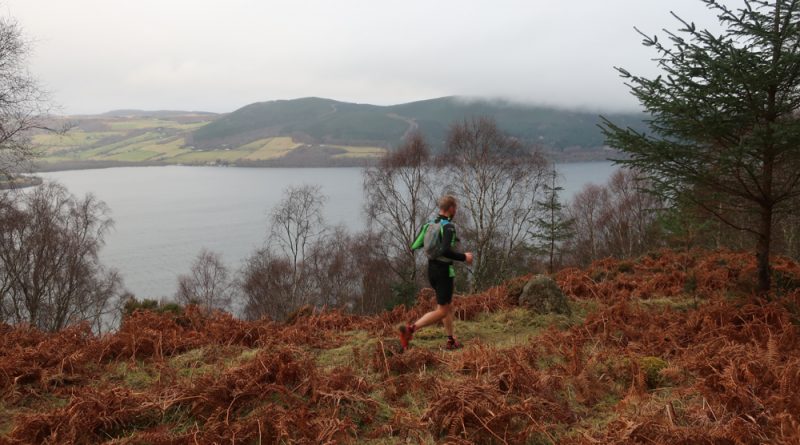 What a wonderful name – the Fair Haired Lad’s Pass. The path over Creag a’ Ghiubhais takes you between Inverfarigaig and Dores on south Loch Ness-side and was upgraded in 2007.

It had been years since I’d been over here and Rich, who I was running with, had never done it.

The name has fascinated me ever since I first heard it. Who was the fair-haired lad?

One document I found suggests the name – Cadha a’ Ghille Bhain in Gaelic – comes from a pensioner who died while crossing the hill on a stormy night, adding that there is a cairn marking the spot where the body was found “high up above the south-west corner of Whitefield plantation”.

Is this the true story? If so, why was a pensioner described as a “ghille” or lad? I’d be fascinated to learn more if anybody knows where the name comes from.

It wasn’t stormy but certainly a little blustery on our visit, but with the wind behind us on this A-to-B run we were making the most of the conditions.

Having run the South Loch Ness Trail (SLNT) from Fort Augustus to Foyers last year, I wanted to do the next stretch on the Loch Ness 360 trail. This will be the last part of the route in the 360 challenge in May, so it would give me a chance to visualise the finish line as well as enjoy some of the amazing trails in the area.

We set off from the small parking area in Foyers, heading down the hill on the pavement then forked right towards the primary school. A right of way sign points to Inverfarigaig and Boleskine and we took this track to make our way up into the woods.

There’s a fair climb here and a section of track that is always badly flooded, though there is usually a way to be found round the left-hand side of the water. The ascent continues to a sharp right-hand bend and, just after this, look out for a blue marker post with the squirrel symbol for the SLNT on it.

A descent leads over roots and rocks towards Inverfarigaig.

Leaving the track above Foyers to enter the woodland trail in the Farigaig forest,

Using the chain for help at the large boulder along the trail.

The route goes left here onto a narrow woodland path that is full of slippery roots and rocks, so requires plenty of concentration. At a large boulder with a chain affixed – presumably for the purpose of aiding walkers, though it is not a particularly difficult obstacle to negotiate – follow the chain and continue as you finally drop downhill.

A great little descent drops you out in a cleared area with a boggy but clear path, and you keep left at another marker to cross a burn and eventually reach a better track that leads to Boleskine.

At a junction at the bottom of a hill, with a large boulder to the right of the track, keep straight on and then ignore numerous coloured marker posts for local walks on the way to Inverfarigaig, sticking to the main track.

Despite having walked and run here many times, I still managed to make the mistake of crossing the wooden footbridge as the track starts to drop! Don’t do this – instead follow the path down to the car park and toilet block (which is open all year) at Inverfarigaig.

Now the three-mile warm-up was done, the rest of this enticing route lay ahead! We went left on the road then right to cross the bridge on the main road up towards some houses.

Our next challenge was the Corkscrew road – off to the right just before the houses – which winds its way up steeply in a series of hairpin bends. Despite its status as a public road, after the main climb it is no more than a dirt track complete with farm gates, so we saw no traffic at all along here.

The view over Loch Ness through the trees was impressive and inland Dun Dearduil is prominent as you make your way along towards Ballaggan and Balchraggan – watching out for any cattle that roam freely in this area.

The track turns back to a surfaced road and we were looking out for the right point to turn off to reach the Fair Haired Lad’s Pass. It comes after a cleared area of forest and just after a crossroads, with the squirrel post pointing the way left.

We crossed the cattle grid and were pleased at the surprisingly runnable gradient of the pass, which continued pretty much to the top. A short way up, look out for a hidden marker at a junction where you turn sharply left onto an older track that narrows and then leads past a forestry post with the pass named on it.

The path eases through some taller trees then emerges at a very short, sharp rise to reach the pass – at 333m above sea level, the second highest point on the South Loch Ness Trail.

The views over to Urquhart Bay and up and down Loch Ness are phenomenal, and it’s definitely worth stopping to take a look – as you’ll need to be watching your feet on the descent as it plunges steeply down the hillside on a twisting and turning path with steep drops off the side in places.

It’s so steep it’s hard to slow down at times as you lunge for the next turn and duck between tree trunks!

We had one moment of confusion with the route down, when the path appears to split and only a tiny marker for the Trail of the 7 Lochs suggests the way to go. Follow it to turn right here, as it turned out we guessed right!

There is a little more climbing as the route follows forestry tracks, through a working area then out onto more tracks, with views to some ruins below to the left. After a little unexpected climb, we forked left at a track junction and continued for a while as the miles added up.

Eventually we dropped down to the roadside, though a path leads off to the right to keep you off the hard surface. The legs were tiring a bit by now but there were still little burns to cross and twists and turns in the route that meant we had to stay focused.

Not long before Dores the path crosses the road to follow a route between the road and the loch. This looks like a fairly new section of path but it is very soft underfoot in places, making it tough work at this stage of the day. It climbs up to the road to pass the entrance to the fish farm then returns to the shore, with Dores beach tantalisingly out of reach!

The path ran out of steam before we did, however, as it dumped us out on the road just at the countdown to the 30mph limit at the edge of the village. We hopped up to the road and made our way slowly towards the beach where, despite the cold wind, we were met by my wife and children bracing the elements.

It was great to be at the finish but hopefully it will be a little warmer at the end of May when, all being well, I will complete the circuit of Loch Ness from Dores to Dores in three marathons on consecutive days.

On forestry tracks at Erchite Wood near Dores.

At the bottom of the Corkscrew road in Inverfarigaig.

The final stretch of the trail brings you along a testing route on the shore of Loch Ness with Dores beach in sight.

Running through the trees on the way descent towards Loch Ness.

A twisting descent awaits after the Fair Haired Lad’s Pass.

The start of the Fair Haired Lad’s Pass at Balchraggan.

Heading up the road at Ballaggan with Dun Dearduil behind and the cloud covering the hills beyond Loch Ness.

Running up the ‘public road’ to Ballaggan.

Foyers to Dores on the South Loch Ness Trail