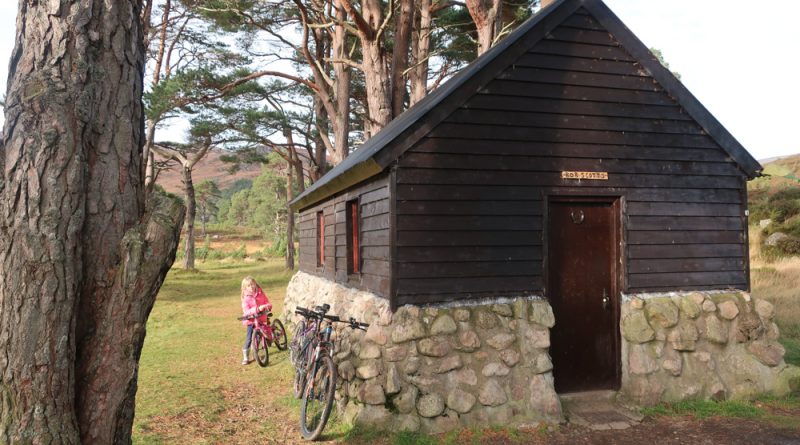 An exciting easy cycle through Glen Lui from the Linn of Dee, near Braemar, to reach a famous bothy

The promise of hot dogs and hot chocolate at Bob Scott’s bothy was more than enough to encourage the children to cycle this enchanting route in the Cairngorms. It meant I had a bit more to carry than I would usually on such a short ride, but the extra weight of stove and gas wasn’t much of a hardship at this pace.

The weather was set fair, so the glorious surroundings of the Mar Lodge Estate were at their best. The National Trust for Scotland took over the estate in 1995 and their work here has allowed the remnants of the ancient Caledonian forest to thrive.

We spotted red squirrels and crested tits even before we’d got going, though with a family of five to get ready there’s no getting going quickly anyway!

I was riding with the two girls, while my wife ran with the baby buggy. The route is mostly on an excellent estate track, though there were a few awkward steps as well as a section of boardwalk through the forest which we had to negotiate.

From the Linn of Dee car park, we followed the Glen Lui path signs to climb briefly through the pine trees before dropping down the steps and riding over the short boardwalk section to a gate. There’s a great little climb after the gate before you bend right at the top for an easy section that soon meets the vehicle track, where you turn left.

It’s a straightforward cycle from here, following the clear track through the beautiful forest before it drops to cross the Lui Water by a wide bridge. As you veer left on the far bank, the view ahead opens up and you can see the high tops of the Cairngorms ahead, a dusting of snow visible on the very highest points as we enjoyed the warm sunshine.

Ahead, there are clear remnants of a number of old townships, with old stones arranged into rectangles and overgrown with lichens, moss and heather all that remains of the buildings that people once called home in this glen.

An old wall running for quite a distance alongside the track is clearly part of the lives that were once lived here, though its purpose is less clear than its structure today.

The glen is believed to have been cleared in the 1770s and is now a popular access route into the Cairngorms from the south. We soon reached the boarded-up Derry Lodge, once a grand shooting lodge and stopping-off place of Queen Victoria after her famous trip up Ben Macdui – on the back of a pony and reputedly in disguise.

There are now ambitious plans for the NTS to transform the derelict building into a hostel for walkers and cyclists with an outbuilding converted into public toilets to help deal with the ongoing issue of us humans not dealing with our own waste appropriately when out in the wilds.

The bothy is nearby, so after having a peek around the outside of the lodge, we rode a nice little path down to the river and walked along a narrow path to reach it. The bothy itself now has a septic tank toilet, flushed by a bucket of water taken from the river.

This simple shelter has a fascinating history. It is named after Bob Scott, who was the gamekeeper for the Mar Lodge Estate and lived at Luibeg Cottage across the water from 1947 until he retired in 1973. A wooden shed beside the cottage had been used as a shelter by walkers and climbers and Bob was happy to continue this tradition. When he retired enthusiasts persuaded the estate to keep the bothy open and helped to maintain it.

However, in the winter of 1986 it was accidentally burned down. A replacement bothy built further down the glen also burned down in 2003, but the Friends of Bob Scott’s group raised money and built the current structure on the same spot.

Today’s bothy is a great little shelter, built of wood with stone cladding around the base in a beautiful stand of pines beside the river. It has a wood-burning stove, a porch and a sleeping platform which can apparently sleep six – though four may be a tad more comfortable in my opinion.

That said, my girls weren’t impressed. Despite the hot dogs and hot chocolate, they didn’t like the rustic old chairs, dirty floor and simple accommodation. The youngest, however, took it all in his stride, grabbing the brush and sweeping the floor like he does at home – perhaps we’ll be the ones enjoying more bothy trips together in future!

Refuelled and ready to go, we walked up another little path that leads up to the track and set off for an easy ride back to Linn of Dee, following the same route but this time the very gradual descent made it even more of a pleasure.