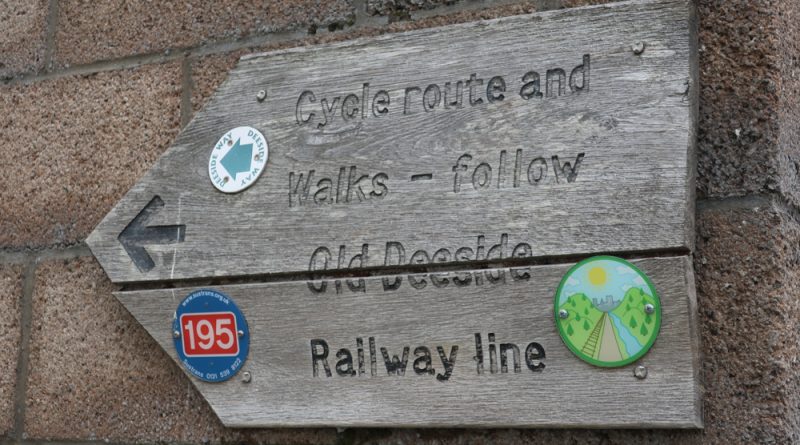 Ballater to Aboyne and back on the Deeside Way cycle route

Travelling like the royals may be out of the question for most of us, but we can at least imagine what it might be like with a ride along the old Royal Deeside Line. The 41-mile Deeside Way follows the old railway route from the heart of Aberdeen to Royal Deeside and, more specifically, the former station at Ballater.

This grand building, built in 1866, was where Queen Victoria would alight to visit Balmoral Castle further along the glen; today it hosts the tourist information centre, a museum, library, tearoom and restaurant.

Next door is Ballater Bike Station, which hires bikes as well as providing any local information.

You access the old railway line by going past the front of the station building, then turning left just after it where a rustic sign points to “Cycle routes and walks”. At busier times, you’ll need to walk down the narrow alley and ramp that leads you onto the old trackbed and past the platform.

The route soon takes you away from the houses with views over to the forests and hills to the north. There’s then a drop to the A93, which you have to cross at a slightly awkward corner before climbing back up to the line. Sustrans, which has adopted the Deeside Way as Route 195, has plans to replace the ‘missing’ bridge here in the future, but for now you must cross the trunk road with care.

From here the line goes for miles without any such problems, and you can just enjoy the surroundings and take in the scenery as well as the history.

Tullich Kirk is the first point of note. This church dates back to around 1400, though evidence of the site as a place of worship has been found dating back to the mid-600s AD. Tullich was abandoned as a church in 1798 after its parish was merged with nearby Glenmuick and Glengairn but it was still used as a burial site after that date.

There is a story of the minister being late one Sunday and the congregation keeping warm by dancing a reel in the kirkyard, something which is said not to have pleased the churchman when he arrived!

I kept going on the line towards Cambus O’May, where there are forest walks from the opposite side of the road.

A little further on I came across the damaged and closed Cambus O’May bridge, which was battered by water from the River Dee during Storm Frank in December 2015. Looking at the water level today, it is hard to comprehend the amount of water and the force that caused such destruction.

The cast-iron suspension bridge was built in 1905 and refurbished in 1988. Aberdeenshire Council has plans to repair it but with an estimated bill of £400,000 no date has been set for its reopening.

The cycle route continues past an old station platform before bending onto the Muir of Dinnet, part of a national nature reserve. There’s a long, gradual incline here before it levels again to reach the village of Dinnet.

Cross the public road here to continue along the signed Deeside Way, which runs parallel to the A93 for a while now to reach a parking area for the Deeside Gliding Club. I watched as the gliders were towed into the sky, ready to soar high above the trees and hills. Apparently, the record height of a glider launched from here is 38,600ft.

I was happy to be on terra firma, following a narrow stretch of path that rises to cross the A93 again, though at an easier crossing point this time thankfully. A long straight section goes under a bridge and crosses one more road before rising to reach the road in Aboyne.

Unfortunately, there’s a short gap in the Deeside Way after this point, but after a bite to eat and a drink from the excellently named Spider on a Bike café, I was heading back along the royal route to Ballater in any case.