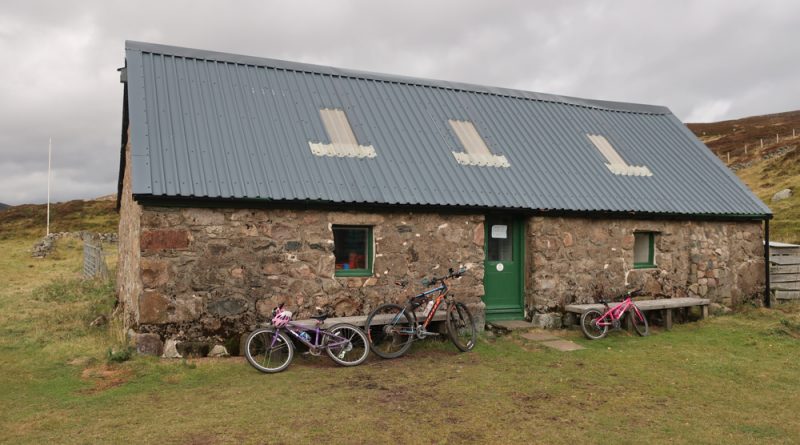 A testing cycle for the family with a break at the bothy, before an easier return through Glen Callater – a popular route with the Royals

The route over the hills from Braemar to Glen Clova via Jock’s Road has become an integral part of the history of access in Scotland.

Our little cycle route doesn’t follow it for anywhere near the full length, but instead uses the estate track from Auchallater, just outside Braemar, to the bothy at Callater Stables – the gentle introduction to a route that rises to more than 900m above sea level and traverses the unforgiving plateau of the Tolmount.

Jock’s Road was the subject of court action during 1886-88, after the then estate owner Duncan Macpherson attempted to close the route entirely. The Scottish Rights of Way and Recreation Society – now known as ScotWays – challenged the closure and eventually proved that drovers had used the route for many years to take sheep from Braemar over the Tolmount to the market at Cullow in Glen Clova.

A noticeboard at the Auchallater car park repeats the story that the route is named after John Winter, who defied the original ban and testified at the court case, although ScotWays says that the name existed prior to this time, leaving the origin of the name a mystery.

Whatever the truth, it is certain that the perseverance of the society helped to cement to fundamental rights of access to certain land into our laws, and we are still benefitting from this battle today.

Today’s estate owners request a £3 donation for use of the car park, from where the route is signed as “Public path to Clova”. It starts with a short, sharp climb up to a gate, which gives access to the track beyond.

This glen is apparently a favourite haunt of Prince Charles and other members of the royal family when they are in the area, and we were told that it’s quite obvious when they are out this way due to the number of Range Rovers in the car park and the security staff lingering there. Today we were the only ones in the car park, so we wouldn’t be sharing a drink in the bothy with him, as members of the local mountain rescue team have in the past.

The track up to the lodge and bothy closely follows the line of the Callater Burn, a beautiful stream strewn with bedrock and little pools which would make this a great place to picnic and paddle on a warm summer’s day. Unfortunately for us, it was chilly with a strengthening head wind, and we spent much of the time encouraging the children and giving them a helping hand on the rougher bits of the track and on the hills.

The land here is managed for grouse, so after a beautiful gorge at the start with some deciduous trees showing off their best autumn colours, we didn’t see another tree until we reached the lodge, so shelter was hard to come by.

We battled on, knowing that the way down with the wind behind would make for a great second half to this adventurous outing.

After a couple of kilometres, the track crosses the burn on a vehicle bridge before a flatter section after which there’s a fork in the track. Keep left here to stay on the east side of the burn. You start to see the hills of the Tolmount rise in the distance as you approach the basin that holds Loch Callater.

We passed a couple of lads who were walking back to Clova having done Jock’s Road in the other direction the day before. It was going to be an exposed slog for them when they got up high, but we were lucky as we climbed the final little rise before the lodge to be able to seek sanctuary in the bothy before our return trip.

After a coffee and some lunch, we explored the grounds of the lodge and a little rise with a cairn and plaque dedicated to the Queen’s diamond jubilee in 2012. It was situated at a fine viewpoint looking over Loch Callater and I saw the path skirting the edge of the loch before it climbs onto the plateau – inspiration for a future hill walking or backpacking visit.

We eventually tore ourselves away, getting back on the bikes for a fun ride back down the glen. Clara and I blasted off in front, enjoying the well-earned downhill mountain biking, and were back at the car in no time.