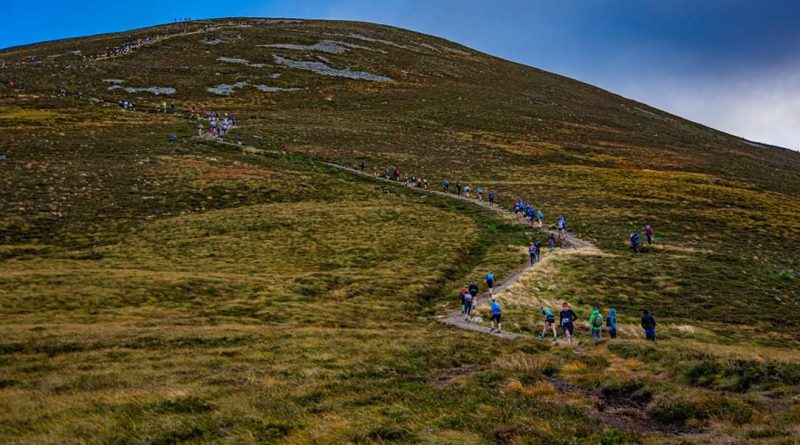 Standing on the start line of the Meall a’ Bhuachaille Hill Race at the end of October, I got a sure sense of de ja vu. Just a fortnight earlier I had stood in almost the exact same spot ready to cross the start line in the Aviemore Half Marathon.

Both events are great dates on the running calendar in Speyside, and this was my first time taking part in the hill run; only my second in the half marathon.

I’d managed to put in a great time at the half, crossing the line in 1:32:41 – only to realise the course was a little short, so it wasn’t a genuine half marathon PB. However, my pace was similar to my best time and certainly quicker than I’d expected to go this time around.

So a couple of weeks later I returned to the Badaguish Outdoor Centre for the start of the Meall a’ Bhuachaille race, an event that had been on my radar for years but one I’d never got round to doing.

I hadn’t run much between the two events so my brother Iain and I decided to run together – at least, as much as is possible on a course such as this!

The route begins on forest tracks, climbing very gradually to meet the path up to Meall a’ Bhuachaille, when the ‘hill’ element of the race really begins. The path climbs up into Coire Chondlaich, getting above the trees and onto the open hillside. It’s a stiff pull up to the bealach but there’s still another 200 metres or so of climbing to reach the cairn.

It was windy up on the exposed hillside as we followed the stony path to the 810m summit, rounding the cairn before making our way across the heather and rocks back towards the bealach. This is where the real hill runners make some serious progress – while the rest of us try to avoid twisting our ankles in the tussocky terrain, they glide at pace down the roughest of mountainsides.

Having done the named hill in the hill race, you’d think the climbing part would be all but done – but you’d be wrong.

Instead of following the crest to the next top, the race route diverts across pathless terrain to a cairn on Creagan Dubh before striking steeply up to Creagan Gorm at 732m, where a hardy marshall was braving the chilling wind.

There’s a third hill to bag before the descent back to the forest but a subsidiary top in between these last two can catch you out if you’ve not looked closely enough at the map! After that one, the ridge makes an obvious turn to the right before the final summit of Craiggowrie.

Flags marked the strict route off this hill, which led onto a boggy mud bath of a path through the sodden and eroded peat. There was no traction to be had anywhere, whether battering straight though the brown stuff or diverting through the waterlogged heather at the sides.

Iain was ahead of me on this descent, as I tried my best to find a feasible route through. Eventually it started to level, and more bog led into the trees, where we were guided towards the forestry track, which came as a blessed relief after such a descent!

A mile or so of easy downhill running remained and I was pleased to be able to keep up a decent pace on it after the hard work of the previous hour and a half.

Remarkably, the winner of the race, Finlay Wild, managed to do this last mile in 4 mins 45 secs – on his way to smashing the course record, which he has now set at pretty much dead on the hour mark.