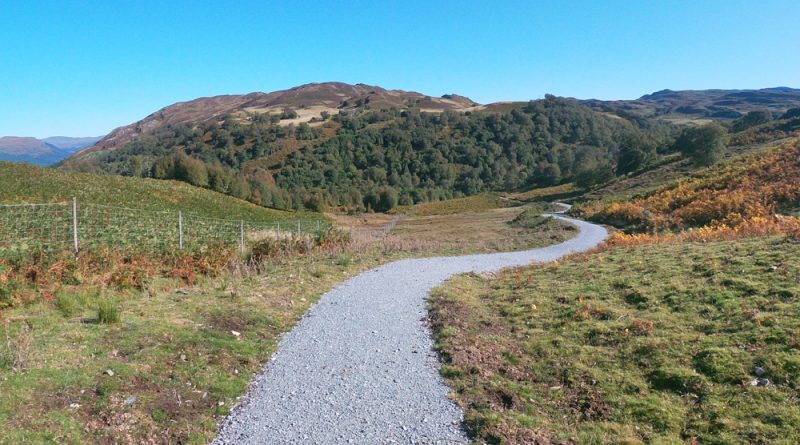 There has been a lot of talk in the running and biking communities since the announcement of a new round Loch Ness challenge due to take place next year.

The tourism group Visit Inverness Loch Ness is organising the Loch Ness 360 Challenge, with an 80-mile ultramarathon, a mountain bike/gravel ride event and three marathons in three days, all completing the loop of the loch.

Experienced events company No Fuss Events is taking on the management of the weekend in May 2020, which is sure to attract runners and riders from near and far.

I was quick to sign up to the three marathons in three days, looking for a challenge to push me beyond my comfort zone. I reckon this should do it!

The route of the running events will largely follow the Great Glen Way on the north of the loch and the South Loch Ness Trail on the other side. This 360-degree off-road loop was completed last year with the opening of a stretch of path from Fort Augustus to Loch Tarff, funded by SSE from the community benefit funds from its nearby Stronelairg wind farm.

This was the only bit of the route I had never been on, so I decided to go for a bit of a route recce and get a taste for what the marathon challenges would be like.

Having dropped the bike at Foyers on the way to my starting point at Fort Augustus, I was all set to run the 15-mile one-way route which will make up the first part of the third marathon of the trio.

I knew it would begin with a big climb, with the long ascent to the Suidhe a familiar one on the bike. Starting at the main car park in the village, I headed over the canal and forked left on the road to Whitebridge, and in no time I was away from the throngs in this tourist hotspot.

On a glorious day like this, it is easy to see why it is such a popular spot for visitors. The well-made path led right down to the shore, giving a nice gentle warm-up, before climbing up zigzags and crossing the road, soon giving a great view back over the loch and to Fort Augustus.

It was slow going, though, and it took a lot of effort to cover the first few miles. As well as admiring the scenery, I was thinking how this might feel after running two tough marathons in the previous two days.

A standing stone on the way up to Carn an t-Suidhe, with Loch Tarff in the distance.

Picnic bench before a steep climb after crossing the Allt Doe.

Crossing a burn through a nice gorge on the way up to Loch Tarff.

Information panel at the Whitebridge Hotel.

Walkers on the South Loch Ness Trail path up to Carn an t-Suidhe from the viewpoint car park.

Those thoughts were soon put to the back of my mind as I worked my way higher, not so much getting into a rhythm but making progress as I traversed the hillside above the old military road.

The new path runs alongside a nice little burn which it then crosses before reaching the access track to the wind farm. Whatever your view of the turbines here, there’s no doubt this is a great part of the route and a fitting way to complete the loop of Loch Ness. SSE Renewables is even sponsoring the Loch Ness 360 Challenge.

Graeme Ambrose, the chief executive officer of Visit Inverness Loch Ness and a long-time champion of the idea of a full off-road circuit around the loch, said: “We are very excited about this new event and delighted that SSE Renewables is supporting us in the delivery of it.

“We are also very pleased to have secured the services of experienced event organisers No Fuss Events to manage the event over the three days.

“The Loch Ness 360 trail is a fantastic new asset with which to sell the attraction of the area and the Loch Ness 360 Challenge provides the opportunity to not only further raise the profile of it, but also to provide genuine economic benefit to businesses and communities around the loch.”

The south side of Loch Ness doesn’t have the popularity of the busier north side, but in many ways it benefits from this – especially if you enjoy cycling on quieter roads and seeking out its hidden gems.

After all the climbing it was great to enjoy a brief respite as a lovely downhill stretch led down into Glendoe, and I was running like a child again, arms out wide pretending to be an aeroplane! Soon I was dropping down a little zigzag slope and crossing the road before using the road bridge to cross the Allt Doe, rejoining the path on the right after the river and starting the steep climb up the other side.

The gradient eased a little as the path followed an unnamed burn in a delightful little gorge, before emerging from the tree cover. A little more climbing and soon Loch Tarff was in view as I ran along an almost level path.

As I dropped to the layby at the end of the loch, I had covered five miles, but the climbing wasn’t over. The South Loch Ness Trail used to begin here, and an older and rougher path winds up to Carn an t-Suidhe above the viewpoint on the road.

Looking back at the view, I could only think of the word ‘stupendous’ to describe it; there wasn’t a cloud in the sky and the horizon was just hill after hill, with the deep blue of Loch Tarff in the foreground. This was a rare treat, indeed, especially at this time of year.

Back to the task in hand, and I continued my way up to the top, where another fine view stretches for miles to the north. The biggest climb of the day was over now as well, so I ran down the path towards the parking area, turning left before reaching the road.

A little path zigzags down to meet a forestry track, and as I went down, a man was coming the other way, pushing his mountain bike full of bikepacking kit – making me realise how tough the cycle version of the Loch Ness 360 Challenge was going to be.

A couple of back road sections on the way to Whitebridge gave me the chance to pick up the pace a little, and I was pleased I could manage to stride out a little after all that climbing.

The trail crosses the main road just after the Whitebridge Hotel – immediately before reaching the original Wade Bridge built in 1732 on the military road – and follows a track into the Dell Estate, which leads back to Foyers.

Further along the track, signs direct you around the back of the farm buildings then a route through rough farmland leads down to a burn crossing – usually straightforward on large stones – before reaching a straight track through the woods. This gave some good running to emerge at the Upper Falls in the village, where you cross the bridge and pass a few houses to meet the road.

A left turn here led up to the top of the hill and to the car park behind the shop and café where I’d left my bike. The run had been hard work but a beautiful route and gave me an impression of how hard the three marathons in three days are going to be like.

Now if I wanted to experience even more of a challenge, all I had to do was pedal back up to the Suidhe against the wind before the long descent back to Fort Augustus.

Terrain Well-made path to Loch Tarff, steep in places; rougher, varied surfaces on paths beyond here, plus some forestry tracks, minor roads and boggy bits to negotiate. Livestock was also present in some areas