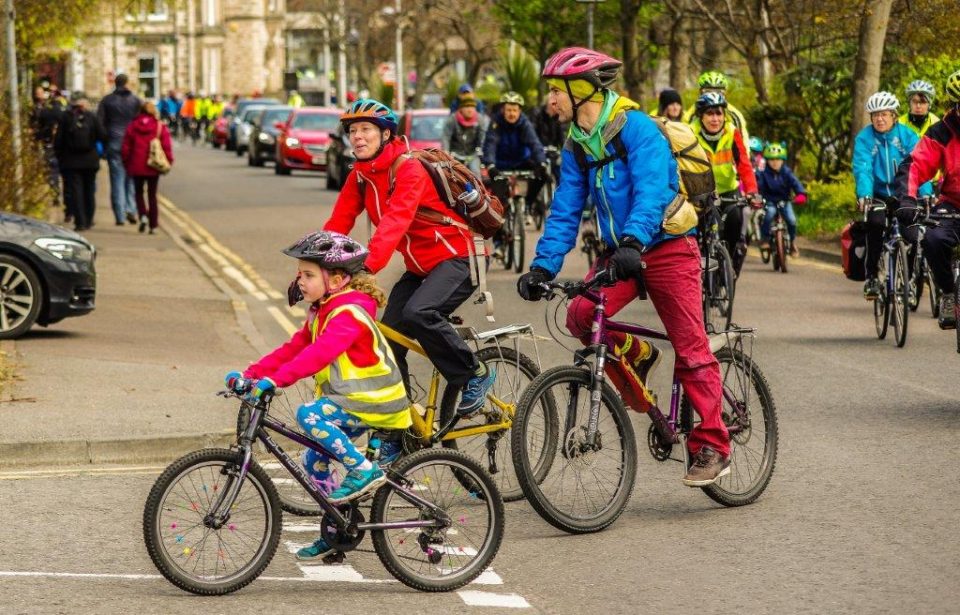 Cycling was top of the agenda last weekend as Inverness hosted two events that put two-wheeled transport in the spotlight.

A record field took part in Sunday’s Etape Loch Ness, cycling 66 miles around the world-famous water on roads that were closed to traffic.

On Saturday, families and others came out for a mass cycle ride in the city calling for change to make cycling a realistic day-to-day choice for everyone.

They were backed by local campaigners and politicians at the event, which was a first for Inverness as it joined the grassroots Pedal on Parliament movement that also saw rides take place in Aberdeen, Edinburgh and Glasgow over the weekend.

It was great to be part of both of these Inverness events, as they show the popularity of cycling here in the Highlands as well as highlighting the many benefits of a city that treats cycling as a primary means of transport.

The promotional poster for Pedal on Parliament used this fantastic quote from Enrique Penalosa, the Colombian politician: “The great city is not the one that has highways, but one where a child on a tricycle or bicycle can go safely everywhere.”

It’s difficult to argue with such a philosophy, one that puts children at the heart of a city’s transport network, to the benefit of all. Cycling is a relatively low-cost solution to so many issues, from congestion and climate change to health and wellbeing.

John Finnie, the Highlands and Islands Green MSP, spoke at the PoP Inverness event. He compared the huge sums of money being spent on the trunk road network in the north of Scotland at the moment with the “relatively modest sums that are required to have a proper and safe cycle infrastructure”.

The point behind this is that these are all political decisions, and designing cycling into Scotland’s roads is something that should be happening anyway.

Those who, like me, enjoyed the freedom of cycling the roads around Loch Ness with no traffic on Sunday will have appreciated the joy of taking fast-moving cars, buses and lorries away from slower and more vulnerable road users.

It’s not something that needs to be restricted to one morning a year – with the right funding in place (PoP is calling for 10 per cent of the transport budget, an increase from the 1.6 per cent that currently goes to active travel) we can create safe, connected cycle routes, separated from motorised traffic and from pedestrians.

Inverness is bidding for funding to help build its first truly segregated cycle route from Millburn Road onto Academy Street. I hope it beats off the competition from the central belt – but with a rebalancing of the Scottish Government’s cash for transport, we could have a real network of cycle routes across the city, as well as in Edinburgh, Glasgow and elsewhere in the country.

Here, we need to start building them into the road network now, as the city expands, rather than leaving it until it becomes a much more difficult job later on.

I still have a copy of the plans drawn up in 2007 for a cycle route parallel to the A82 from Inverness to Fort Augustus. It’s time this was revisited, as well as the routes within the city. Our roads need to be safer for all users, especially the most vulnerable.

Part of the attraction of the Etape, particularly for those of us local to the event, is the fact that you can cycle on a route that normally is seen as out of bounds to all but the most confident road cyclists.

Instead, let’s create a route that locals and visitors can cycle on whenever they choose, connecting the communities and tourist attractions along the north side of Loch Ness.

What a legacy that would be for both the Etape and Pedal on Parliament.

When it began in 2014 it was the fact that the A82 would be closed to traffic that first made me – and many others – enter this new cycle sportive. Until then I hadn’t really entered bike races, being more of a “leisure cyclist” at heart.

The event really captured my imagination and I’ve been back every year since, challenging myself to complete the 66-mile route a little quicker each time.

There was a slightly different start this year, with the new West Link road being under construction. So we headed round Bught Park onto Glenurquhart Road and over Tomnahurich Bridge to follow the A82.

I’m always amazed at how quickly you can reach Fort Augustus by bike with the adrenaline of an official event to push you on. Even with a brief stop at the first feed station at Invermoriston, I was still at the halfway point in just a few minutes over two hours.

After reaching the far end of Loch Ness, there’s the looming King of the Mountains stage – the long climb up Glendoe. It’s about five miles from bottom to top with 380m of climbing at gradients of up to 12 per cent.

I’m pleased to say I’ve been up this hill a fair few times and it hasn’t defeated me yet! It’s never easy but experience certainly helps, and I got up there in my fastest time yet. I’m putting it down to cycling the North Coast 500 last year – when you really do get used to sustained climbing!

After another stop at Whitebridge I was ready to tackle the final 25 miles and felt strong as I pushed myself to maintain a good speed through the ups and downs of the loch-side road through Foyers, Inverfarigaig and Dores.

The last couple of climbs after Dores and Scaniport behind me, I was spurred on by my family cheering me on at the Holm roundabout and blasted the final few miles into the city, even managing a sprint finish over the line.

I finished in a personal best of four hours, seven minutes and 32 seconds – no record-breaking feat but I was delighted with the ride, and with the Harry Gow dream ring afterwards!