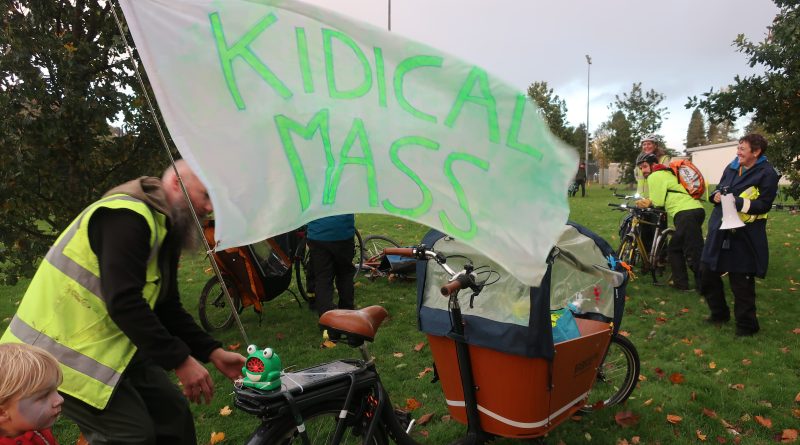 Wet and windy sums it up. A blustery, miserable November day in the Highlands – yet 150 people, many of whom were just children, showed up for the third Kidical Mass event in Inverness last weekend.

With the climate emergency a hot topic after the COP26 conference in Glasgow, I didn’t get a single dissenting voice in my household from the three children of 10 and under.

After all, it’s their future that we’re talking about. But not only theirs, hundreds of thousands – no, millions of children around the world who will be hugely affected by climate change in the coming years.

Forget the deniers, this is real and it’s already starting to bite, as any serious scientific analysis will demonstrate.

Yet we remain complacent and comfortable in the lifestyles we have become accustomed to. I’m as hypocritical as anyone – I still own and drive a diesel car, I eat meat and dairy, I even moved into a newly built house last year.

In my defence, we all cycle to school and work every day, regardless of the weather; I’ve only flown on one foreign trip in the last decade; we buy meat from the local butcher rather than the supermarket and, through donations as well as hard graft, I’ve planted a good number of native trees as well.

But despite my good intentions, it still takes a lot of effort for us individuals – even those with a passion – to do the right thing. To leave the car at home and cycle or walk. To choose sustainability over convenience.

We need our governments, at all levels, to make the sustainable choice the default. To ban single-use plastics, to reduce reliance on fossil fuels, to create public space that makes it easier and safer to get around without a car for those who can.

It’s all about priorities. And that’s why we joined the Kidical Mass.

We as individuals are doing what we can. We’re travelling overseas less, we’re eating less meat and buying local, we’re choosing to walk and cycle – but it can’t be left to those of us who are already advocates of active travel to do it all.

We have to create the conditions where people of all ages and abilities – people who would never join a campaign like this – can feel safe if they choose to go by bike or walk. We have to make it easy for them to get from where they are to where they need to be – whether that’s school, the shops, the library, leisure activities or work.

Kidical Mass was a fun event, with a gentle three-mile ride through Inverness city centre followed by cakes and games at the finish near the archive centre at the Bught. But there’s a serious message there, and it’s one organiser Kat Heath wants to get across.

Kat has a nine-month-old baby boy and, like many of the parents here, is uncertain what the future will look like, even in a developed first-world country like ours.

Since the Second World War we’ve allowed cars to become the default way to get about – and judging by recent spending commitments there’s little evidence of a seismic shift from that approach in the near future.

Yet we do need to think and act radically – here and across the globe. Better public transport to connect towns and cities, and better ways of getting around within our towns and cities.

The car-obsessed approach has led to congestion and contaminated air. Perhaps a fresh approach could lead to something better.

There’s a chance here in Inverness, a city developing at a phenomenal rate, to put in infrastructure that does put walking, wheeling and cycling ahead of private car travel. Not alongside it, but ahead of it. Prioritised.

And we’re all now well aware of the importance of mental health and how being more active on a day-to-day basis can contribute to our wellbeing.

I find it astonishing that making such positive changes in our communities remains a controversial subject in some quarters. It’s the sort of action we should expect our governments to be taking without the need for protests and campaigns.

However, as it’s the season for demanding climate action, I’m proud to have played even a small part in calling for change in my community – and my children’s community.

The consequences will live longer with them. I hope we will do enough.