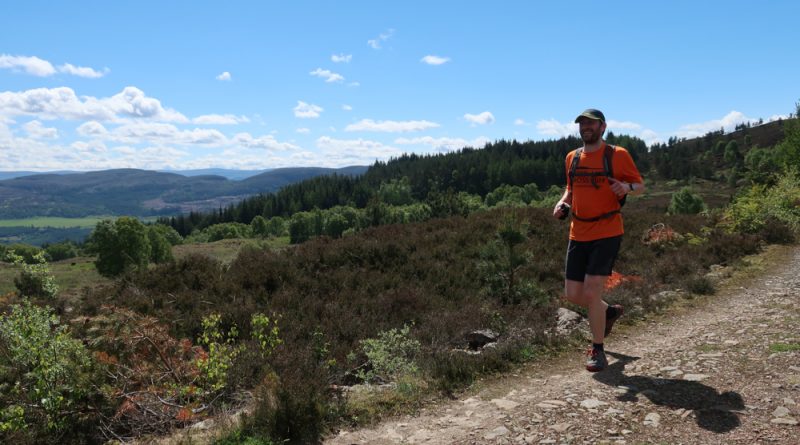 You could say this run was the icing on the cake. I’d taken a midweek day off to celebrate a ‘significant’ birthday and my wife Meg and I decided to spend it together doing something we both love – running.

With the Highland Cross fast approaching, we’ve been putting in the miles recently – Meg more than me, it has to be said – so this would be our last really long run before the event, which takes place on Saturday, June 22.

It’s a route we’ve talked about doing for years and Meg had finally done it a month or so earlier; now I wanted to try it.

So, after dropping the children at school and nursery, we hopped on the CityLink to Drumnadrochit, enjoying the rare opportunity to actually talk to each other without interruption!

Our route ‘officially’ started at the visitor information centre in the main car park at Drum, not least because there are public toilets there (50p charge). The village was busy with tourists, many of them with heavy-looking rucksacks heading the same way as us.

The Great Glen Way, which we would be following all the way to Inverness, heads north along pavements next to the A82 for the first stretch, and we ran past a few big groups of walkers enjoying a warm, sunny day in the middle of a week that had been wet and windy otherwise.

Soon we reached a blue marker post that directed us away from the road and up behind the garden of a house before dropping back down again to follow the line of a fence into the woods.

There are gates galore on this part of the route, which crosses a track and meanders upwards to give an outstanding view over Loch Ness and back towards Urquhart Castle. The air was so clear and the water a deep, glorious blue – a perfect day to be out here running on beautiful trails.

There’s a big climb ahead, though, and it had been a few years since I’d been on it. Thankfully my memory of it was worse than the reality and I felt strong as we zigzagged up between the trees, pausing briefly at a signed viewpoint before eventually reaching the end of a forestry track where the route levelled out.

It was nice to just run and chat to Meg along the way, something we don’t get to do very often these days, what with family, work and other commitments. And we couldn’t have asked for a better day to do it.

It didn’t seem like long until we were through the gate and approaching the farm buildings at Corryfoyness on the edge of the Abriachan forest. The terrain changes here from mixed woodland to moorland, the heather-clad hills interspersed with young Scots pine and birch.

Crossing the muir on the way towards Abriachan.

We passed another walker and decided we would divert from the main Great Glen Way track to climb Carn na Leitire, the hill usually accessed from the Abriachan Forest Trust car park. The wonderful little path snakes its way up at a relatively easy gradient, with wildflowers growing at its edges. It really is like a mountain in miniature here and the views are just spectacular.

Meg raced on ahead to the summit cairn as I gently made my way up to the top before we both made the most of the descent to the car park, continuing along the track to cross a minor road and follow the Great Glen Way again through a gate opposite.

There is a water tap here but we weren’t sure exactly where it was, so had to continue without topping up our bottles. Apparently, it is just through the gate, on the left-hand side in a green frost box. Worth noting for next time.

A nice little path meanders through the woods here, passing a friendly café that’s open 365 days a year. The tempting signs offering tea, coffee, hot chocolate and cake were almost too much to bear with another 11 miles or so left to run!

Instead, we ate some of our own food supplies and continued, heading left onto the minor road after another gate. This couple of miles on the road was tough going but it passes through beautiful country.

Soon enough we reached the marker post that directs you off the road and onto a path that climbs gently for a while before dropping to Blackfold. Now we felt like we were getting nearer to home, the trails here so familiar from years of exploring, though in reality there was still a good bit of running left to do.

After another gate, you pass a felled area of trees before reaching the old drove road at a ruin. This fine path descends ever so gently and despite my tired legs we enjoyed the familiarity of our surroundings, soon reaching the gate below Craig Dunain and dropping to the reservoir.

The view over Inverness and the Moray Firth from up here is something everybody should see. Today it was at its best with the sun still shining.

We were getting thirsty now and, as we made our way down the zigzagging path, we decided we would stop at the botanical gardens to buy a drink. The plan gave us fresh impetus as we ran down the familiar Nurses Brae to reach the canal.

A cool, refreshing drink was just the ticket and gave us that final boost to jog over the Ness Islands and back up the hill to home.
Once we’d picked the kids up later on, it was finally time to enjoy that well-earned cake, icing and all.

Drumnadrochit to Inverness on the Great Glen Way

Terrain First mile or so on pavement then forest paths, moorland tracks and other off-road trails, with a couple of miles on quiet minor road

A long run to celebrate a landmark birthday