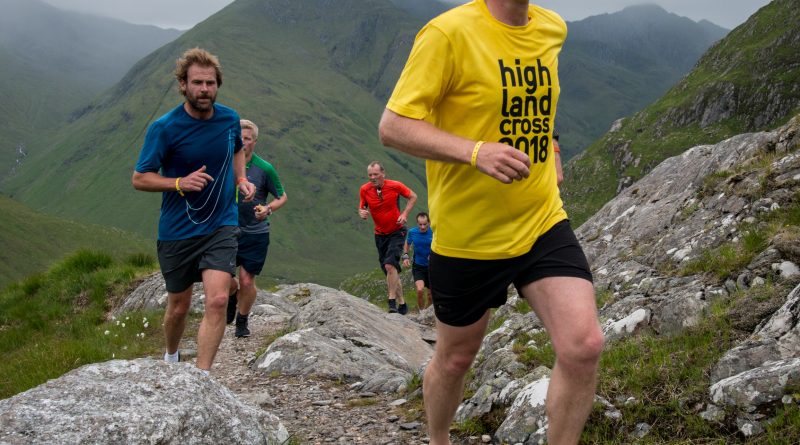 There’s a chance that the total raised by the Highland Cross will surpass £5 million when this year’s donations are tallied up.

That’s a huge amount of good being done for causes across the north of Scotland from an event that began as an emergency services challenge in 1983 and has since grown into a massive community effort.
It’s worth remembering that when you hear what people put themselves through on the 50-mile coast-to-coast duathlon – and when they shove a sponsor form under your nose every year!

This was the fifth time I’d taken on the challenge of the Cross and each year the atmosphere at this unique event excels, with great interaction between participants, volunteers, organisers and supporters.
You really notice this positive feeling as you ride through the communities on the cycle section of the route that links Glen Affric to Beauly on the east coast.

In many ways the cycle is the easy bit of the Cross – if you ignore the fact that you’re likely to be suffering from cramp by the time you attempt to clamber onto your bike after a 20-mile run or walk through the hills!

For the first time this year I can officially declare myself a Highland Cross runner, having finished in under five hours – the designated time for a runner on the entry form being four to five hours, whereas joggers are expected to finish in five to six hours. It’s an insignificant distinction, in truth, but it at least gave me a target to aim for.

In my previous four attempts the best time I’d managed was five hours 22 minutes, so it was a fair challenge to bring it under the five-hour mark and even on the start line on Saturday morning I wasn’t sure if I was up for it.

I made a fast start on the run but it’s only later in the foot section that you know if you are going to be able to keep up the pace and make a decent time. I reached the hill out of Gleann Lichd in Kintail without too much traffic ahead of me and made my way slowly up the 1000ft climb past the waterfall.

There’s little choice but to walk some parts of this demanding ascent; the trick is to be able to keep running after it! I’d certainly slowed down as the beautiful route undulates along what is now officially the Affric-Kintail Way to the red-roofed Camban bothy, one of many water stations on the Cross manned by volunteers from various groups and charities that are part of the event’s community.

The bothy also marks the high point of the route but it’s no good convincing yourself that it’s all downhill from here; there are plenty of hills to come and with more miles in the legs they just don’t get any easier.

I only noticed I was making good progress on the flat stretch after the youth hostel at Alltbeithe, when I was running at what was still a reasonable pace for the terrain and feeling okay. I tried not to get carried away, though, knowing the challenge of the Yellow Brick Road still lay ahead.

Past Athnamulloch at 13 miles and I was still running, slower on the uphills but still knocking in reasonable times mile after mile. It was a mental challenge now to keep going to the end of the run and the camaraderie along this part of the route certainly helps in that regard.

There are lots of “well dones” and “keep it goings” as walkers and runners urge each other to make it. Being able to keep running at a more normal pace meant it didn’t seem quite as long as in the past before I was at the road-end in Glen Affric, just a mile – albeit a long mile – from the bike changeover.

Again the volunteers here really make all the difference, helping you with your bike and kit, bringing you snacks and drinks and taking your spare kit to the bag van to return to Beauly. It wasn’t too long before I was on my way, having stretched out the calf muscles as best I could before hopping on the road bike.

I’m no speed demon on the bike but, having completed the run in my best time yet, three hours and six minutes, I knew that completing the cycle section in my usual time should get me in under the five-hour barrier. The personal race was on!

It’s never easy changing discipline but I got through Glen Affric and down the steep, twisting Fasnakyle brae in little over half an hour, then went for it on the flat section into Cannich, where the villagers were out in force to cheer everyone on. It really does spur you on to keep going and it was the same in Struy, Aigas and Kilmorack as you fire up Strathglass, intent on reaching the finish at Beauly.

I always look out for the Kilmorack Gallery which marks the start of the finish for me, before the road drops past Balblair to the junction with the main road into Beauly, where the finish has been for 35 of the 36 years the Highland Cross has been going.

The last mile is just an adrenaline-fuelled rush to the finish in the village square, where the crowds were out in force on a fine afternoon, and I crossed the finish line in four hours 47 minutes and 25 seconds.

Crossing the bridge at Athnamulloch

At the end with daughter Clara

Conditions had been perfect and I was delighted with my new personal best but it was humbling to stay for the presentation in the Phipps Hall and hear about those who had been doing the Cross for 20 years or more, as well as those who put their own time and effort into making it happen.

It is a truly special event and one that I’m delighted to support each year, with hundreds of thousands of pounds raised by the 750 or so participants going to local charities that really make a difference in our communities.

For full results and details about next year’s event visit www.highlandcross.co.uk

You can donate to John’s Highland Cross fundraising page up until the end of July. Visit www.justgiving.com/fundraising/jdhighlandcross2018