Bikepacking is becoming a popular way to travel through the wilds with minimal gear. John Davidson heads for the hills in the first of this two-part mountain biking adventure travelling from Inverness to Ullapool 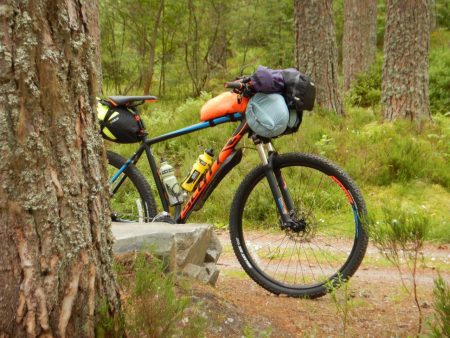 Dragging the wheels through, over and occasionally into the thick black bog, it felt like the bothy would never come into view. Two kilometres was all there was to go but we quickly had to admit defeat in our optimistic efforts to cycle any of the way from where the track ended at a small weir in Glen Beag.

The through-route here is certainly one of the lesser used in the Highlands, though it is possible on foot to climb out of the far end of the glen and over to Inverlael or Strath Mulzie.

We had different plans as we approached the small shelter deep in the heart of Glen Beag. Our route so far had taken us from Inverness on the east coast, along minor roads and pleasant forest tracks to reach the Black Bridge. From there we had ridden through Strath Vaich before forking left into this small glen to spend the night under the roof of this little-used bothy. 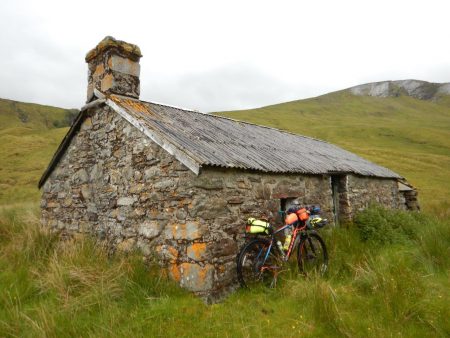 The last entry in the visitors’ book was eight days previous, and tonight we had the place to ourselves. The bothy has two rooms, a kitchen – of sorts – and a sleeping room.

Concerned about mice and other creatures – which are more used to having the place to themselves – my friend Jim slung his sleeping bag on a table to keep off the ground, while I claimed a floor space. No amount of scuttling was going to stop me drifting off after the long ride from Inverness.

The first stretch from the Highland capital was on tarmac, crossing the Kessock Bridge before following the beautiful Redcastle road along the shore of the Beauly Firth then into Muir of Ord. Passing the Glen Ord distillery towards Aultgowrie, we made our way on the quietest routes possible to Contin, where we turned right – after stocking up at the last shop before Ullapool – onto Tor View and into the forest.

Now the off-road riding could really begin, with only brief sections on road to link up the overall route from this point. I’d been planning this route for some time and was delighted to be sharing the experience in good company on this fine weekend.

We followed the quiet tracks past the back of Rogie Falls and under the railway line, heading north-west past Loch Garve, a million miles from the roar of traffic on the other side of the water on the trunk road. Even the climb up through the trees was nowhere near as bad as I had remembered from previous visits and we were soon beyond the lodge and crossing the stone bridge at Little Garve, built as part of a military road from Contin to Poolewe in 1762. 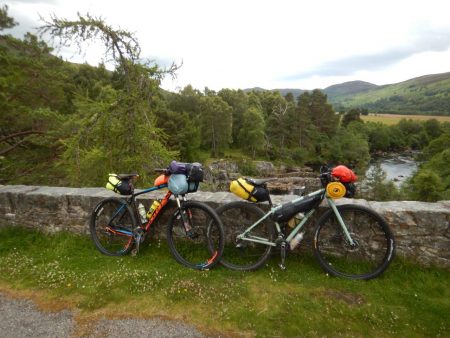 We headed right, through the pine trees, after crossing the bridge, then went right onto the minor road to reach the trunk road junction. Here the route goes right then, around 100 metres ahead, turns left into the forest for another great stretch which has views from high over the Black Water to Ben Wyvis.

We had to keep a close eye out for the junction after just over three miles where a forest track goes sharp right, back on yourself, to drop down to a wooden footbridge over the river and meet the road again near the Inchbae Lodge Hotel. A left turn here leads along the A835 to the Black Bridge and the inviting entrance to Strath Vaich.

The mountains at the head of the glen draw you in and, for mountain bikers, it has the added advantage of a surfaced track as far as the weir before the lodge. Instead of crossing the bridge here, the route goes right onto the rougher track, climbing up to a fine viewpoint above Loch Vaich.

The dark clouds ahead suggested we wouldn’t stay dry for the rest of the day but we were well prepared with our bikepacking kit, with waterproofs ready to put on should the need arise.

We paused for a break at the buildings on the loch-side at Lubachlaggan, with plenty of time to enjoy the surroundings and feeling in no rush to reach the bothy. The sense of freedom when you remove all pressure of time is incomparable to daily life and, for me, is one of the best parts of exploring these wild places.

As the rain started we didn’t mind; we had almost reached the climb out of Strath Vaich, which we took steadily as the track leads you away from the loch towards a junction above Deanich Lodge. In the past I had only ever turned right here to head through Gleann Mor and on towards Glencalvie and Ardgay, but today we were heading left into Glen Beag in order to find the bothy.

The detour is little more than 5km each way but from the end of the vehicle track the going is much trickier, as we discovered.

We dragged our bikes the final 2km until the bothy finally came into sight. Opening the door, we found our shelter for the night: a place of respite in this wonderful, wild country.

Inverness to Ullapool
Distance 90 miles / 145km (Day one – 47 miles / Day two – 43 miles)
Terrain Everything from roads to boggy, remote mountain tracks and paths
Start/finish Inverness/Ullapool
Maps OS Landranger 26, 20 & the final mile or so on 19
A coast-to-coast mountain bike adventure through the Highlands with an overnight stop at a remote bothy