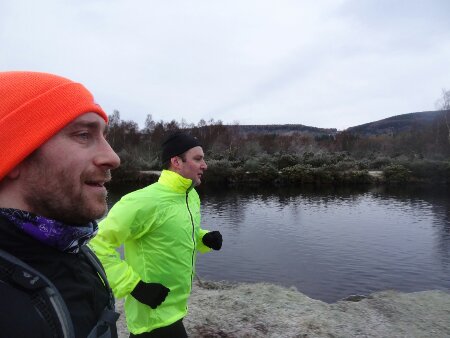 The man in the yellow jacket in this classic running ‘selfie’ is Roddy Riddle – a man who has inspired thousands of people with diabetes (and many others besides) with his determination to show how exercise can help the condition. Last year he became the first person with type 1 diabetes to complete the Marathon des Sables, the toughest foot race on earth.

I was doing an on-the-run interview with Roddy for our spring Active Outdoors magazine, largely talking about his next big challenge, the Ice Ultra, in 2015.

We had a really interesting chat, so much so that I came home and wrote a fair chunk of the feature immediately! And it was great to be out in good company on a proper winter’s morning on the Caledonian Canal towpath in Inverness, where we saw loads of other runners out enjoying the fresh, crisp air.