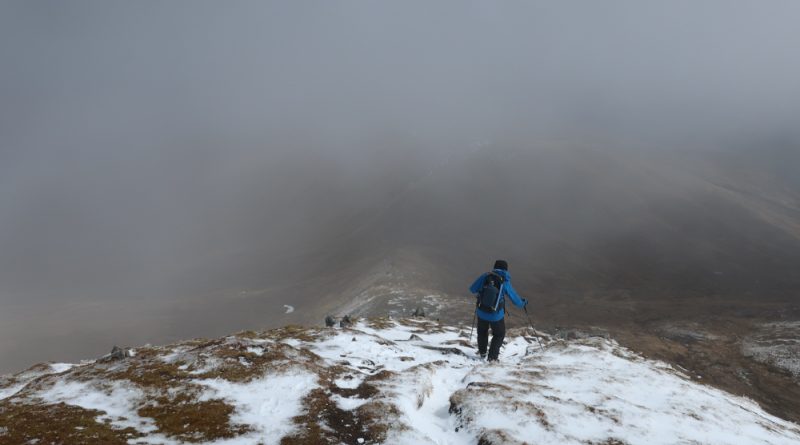 Glen Affric is so often described as one of the most beautiful glens in Scotland that it’s becoming something of a cliché.

But the thing about clichés is that they are often repeated ad nauseum because they are true – and that’s certainly the case with Affric.

I just can’t seem to stay away from the place at the minute! This weekend I’ll be back, leading a group from the Inverness Ramblers on this very route, which takes in two of the area’s most easily accessible Munros.

The most easterly, Toll Creagach, is often dismissed as a ‘lump’, an unkind description of any hill if you ask me. But it is true to say that as you head west from that point the ridge gets more and more interesting, culminating in the highest point north of the Great Glen at Carn Eige.

Last time I’d walked into Gleann nam Fiadh from the new car park at Chisholme Bridge, that had been my target. This time the walk wouldn’t be quite so far.

Peter and I headed up the nice little path through the trees which climbs up to meet a track, which you follow to the right to reach a small hydro scheme. Beyond here you’re back on more familiar territory – a typically boggy mountain path through the glen, and we followed this as far as the Allt Toll Easa.

A good path heads off to the right at a small cairn just the other side of the burn, and we followed this as it climbs to a hidden valley at the base of the ridge to Creag na h-Inghinn, which offers a more direct line to the summit of Tom a’ Choinich.

But my plan was to continue on the old path to the Bealach Toll Easa, from where you can gain the first Munro via a great little narrow ridge.

The path itself has always fascinated me too. These hills were among the first I climbed after moving north to Inverness more than 11 years ago, and poring over the map it seemed odd that this well-made path continued over the bealach and down over the shoulder of the hill’s north ridge before diving head-first into the cold waters of Loch Mullardoch.

The large dam at the eastern end of the loch is the start of the explanation, but there’s a whole hidden history down there, lurking below the surface and just occasionally on the shores.

Before the 1952 Affric-Cannich hydro scheme was built, the path continued to Benula Lodge (in fact, there were two lodges – Benula Lodge and Old Benula Lodge) and connected with a track that led west past what was then Loch Lungard (now swallowed up by its neighbour Loch Mullardoch) to Glen Elchaig via Iron Lodge.

Heading east from Benula Lodge there was a single-track public road along the north side of Loch Mullardoch, where now there is nothing but a reputedly horrible path. Imagine the possibilities if access to upper Glen Cannich was available today! It seems the hydro board wasn’t required to reinstate this road – as it was in other places in the country – because there was no community left for it to serve.

Just the odd ruin – and a few curious marks on a modern map – remain to show what was once a glen full of life, as well as possibilities for routes into and through the hills.

Back at the bealach, we headed west to soon gain the bottom of the east ridge to Tom a’ Choinich. A path winds its way up through the rocks, the ridge narrowing towards the top, though there are no particular difficulties and a bypass path also provides an alternative option.

The cloud had come in and the wind was buffeting us, so our stay at the summit cairn was short-lived and we turned to descend the same ridge back to the bealach. From there we continued east, the ridge climbing a short way before a long plateau that leads to a higher bealach above Coire Odhair.

Along the way our view down to Loch Mullardoch was unbroken, giving us chance to consider the changed landscape to the north – as well as contemplate future trips to access the remote Mullardoch Munros, perhaps by boat to save that horrible walk along the shore.

The final ascent to the ‘lump’ of Toll Creagach is over an easy grassy and rocky slope, the cairn marking the higher spot on the summit rather than the nearby trig point which is surrounded by a small shelter.

The descent is less easy on the legs, as it goes steeply south over a series of terraces. We aimed west of Beinn Eun in order to avoid crags on its far side and, moving over towards the burn running out of Coire Odhair nearer the bottom, we were able to pick up some sort of trod that led us back into Gleann nam Fiadh, a short distance from the run-of-river hydro scheme, from where we followed the easy route back.