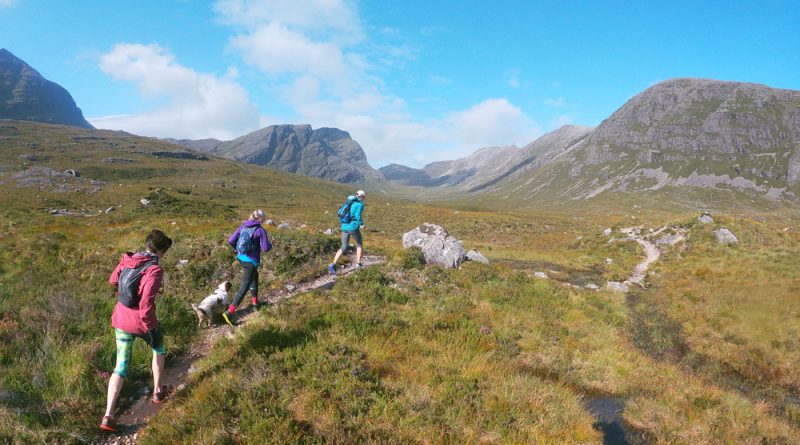 It’s a dog’s life – and so it proved for one energetic springer spaniel that joined us on a run through the awe-inspiring Torridon landscape.

While our exploration of the area took us some 17 miles along excellent mountain paths and tracks high into the hills, I swear the dog clocked up 40 miles or more.

Nothing could dampen her enthusiasm for leaving the path and seeing what else was out there to be discovered – and who could blame her in this idyllic scenery?

I had joined Ian Stewart, director of Trail Running Scotland, and fellow running guide Ben Gibson on one of the company’s scheduled events, the Torridon Explorer. It’s a weekend of guided running in the area, offering beginners and more experienced trail runners an opportunity to enjoy some sociable running and discover some spectacular trails.

This weekend’s group had already had their first day of running when I joined them on the Sunday – so I handily avoided the remnants of a tropical storm that had blown across the Atlantic and scuppered any plans for a high-level route on the Saturday.

The group still managed to get some miles in though, using Ian’s knowledge of the area to enjoy a coastal route that was a little more sheltered.

I met up with the team in Glen Torridon the next morning, ready for a longer run and hoping for some big views on a better day weather-wise. I wasn’t to be disappointed – but we had to earn those views first!

We started with a gentle jog to Loch Clair, where Ian went over a warm-up routine to help loosen up the limbs. Ian’s experience and love of running is pretty well summed up on his website biography, where he states: “I ran a Bob Graham Round for my stag do. A Lakeland round of 106km with 8300 metres of ascent in 24 hours is a great way to find out who your mates really are!”

This day wasn’t going to be quite so extreme, as we took a gentle pace along to Loch Coulin, following the signed footpath on a level route to reach an estate track, turning right to cross over the river then left a few hundred metres along the track.

This is where the climbing starts but the gnarly old track that once made its way up alongside the Easan Dorcha is gone, replaced by a wide vehicle track made to install a series of hydro turbines. Forking left higher up, we soon reached the Teahouse bothy, now back on the path I remembered, and went inside to take a break from the wind.

Among those signed up to the weekend explorer were a group of self-described “middle-aged women” from Carnethy Hill Running Club in Edinburgh. This famous club is the home of Jasmin Paris, who holds the ladies’ record for the Bob Graham Round and the overall record for Ramsay’s Round; champion hill and skyrunner Angela Mudge, and Jonny Muir, who recently released his fourth book, The Mountains are Calling, about the story of hill running in Scotland, among many other well-kent names in the sport.

In such illustrious company, I worried the day may involve some pacey running, but that’s not what these weekends are all about. They are described as social runs, and the pace is gentle enough that no-one is left behind.

Our next section of route took us onto the open mountain, heading below Beinn Liath Mhor and into Coire Lair on a fine, rocky path. This dramatic corrie is a stunning place, high in the hills above Achnashellach in Glen Carron.

Enjoying the moment during a break in the sunshine.

Looking back from the bealach between Coire Lair and Coire Grannda.

John with Liathach for company.

Heading down towards Upper Loch Torridon with Beinn Alligin and Liathach clearing of cloud.

Ian Stewart of Trail Running Scotland offers some advice to the group.

The group takes shelter in the Teahouse bothy.

Skies start to clear as the runners approach Coire Lair.

On the bridge over the Easan Dorcha.

The start of the steep descent into Coire Grannda, with view to Liathach ahead.

Going right at the second cairn, a path meanders at a fairly gentle gradient above the loch in between Beinn Liath Mhor and Sgorr Ruadh, a genuinely special place to run. I had run on the trails past this corrie before but hadn’t ventured into its depths, so this was new territory to me and the skies were now clearing, providing the first bit of sunshine of the weekend for the trail running tourists.

One of them was visiting from Colorado, while others had come from Strathglass and Kyle of Lochalsh. Each had their own reasons for signing up, and I was interested in what makes people pay for the simple pleasure of running.

We were in remote country out here, so some were happy for a guide to take care of navigation, others were keen to meet like-minded souls and all of us wanted to enjoy some new trails and the camaraderie of running together. Ian also offers advice on technique during the weekend, and Trail Running Scotland – which was set up less than two years ago – also offers specific training courses for hill running, skyrunning, mountain navigation and mountain marathons.

The wind picked up as we reached the steeper climb up to the bealach, so we added a layer of clothing and slowly made our way up, earning an unimaginable view of Liathach after passing the small lochan just before the high point. It was no weather to be pausing for too long, though, so I raced down the steep rocky path into Coire Grannde, trying to keep an eye on the trip hazards on the route rather than gaping at the view ahead!

It’s incredible to pass through such landscapes on trails that are so well connected, as well as being so runnable for the vast majority of the way. There are many possible variations on the route and Ian chooses one based on conditions on the day as well as on the group’s aims and abilities.

We followed the meandering path to the Bealach na Lice, dropping to Loch an Eoin, where the dog played fetch with a tennis ball up and down the steep slope, seemingly untouched by weary legs starting to affect the rest of us, while we stopped for a short refreshment break.

Another short descent brought us to a flat area of slabs, where we had to cross a burn between two large lochans on stepping stones before the final downhill stretch to Annat.

There was still time for our four-legged friend to go for a swim in a tiny little lochan beside the path before the last few kilometres. At this point it was clear that, despite the long distance covered and the tough terrain, nobody really wanted the run to end.

Across the glen we saw the final drifts of cloud lift off the Torridon Munros, leaving a spectacular skyline for us to admire as we finished what one of the runners described afterwards as the best running day she’d ever had.

One tired out dog under the table at the Torridon Inn might well have agreed – if she’d had any energy left!

A social run through glorious scenery with Trail Running Scotland