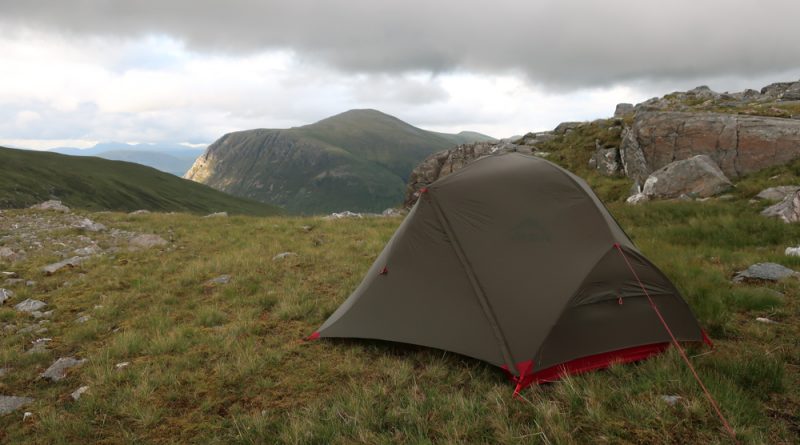 Waking up to fierce wind and intermittent driving rain, I knew the day ahead was not going to go exactly as planned.

I’d walked in to the Bealach Crudhain last night, a six-mile trek from Craig along the Glenuaig Lodge track, then over the river – by wading rather than trusting the dubious two-wire bridge – before climbing to the Bealach Bhearnais and up to my wild camping spot.

I’d chosen the bealach as I’d be sure to get a breeze flowing through to keep the midges at bay. That plan certainly worked – but during the night the wind blasted at up to gale force, while the rain came and went, driving across the mountainside.

It splashed through the tent’s vents with each gust, soaking the bottom half of my sleeping mat and bag, and leaving a puddle in the corner. I’d even had to give the poles a kick in the night a couple of times as the force of the wind knocked them out of shape, which only encouraged more water into the inside.

My motivation levels weren’t at their highest at this point. The forecast had suggested a dry morning with heavy rain later in the day, and only light to moderate winds.

There was no point trying to brew up on the stove in these conditions, so I ate my muesli and malt loaf for breakfast before assessing the situation.

Looking up the west ridge of Sgurr Choinnich – the first Munro in my planned triumvirate – I could see the wind whipping over the rocky bands before the way ahead disappeared into the cloud above. I could barely stand without effort at the bealach, so goodness knows what it would be like up there.

I considered my options; basically, they seemed to be to walk out the way I came yesterday or to make an effort at least at the first Munro, being prepared to turn around if things got too bad. Knowing that I would regret not even trying, after packing up the soggy tent I overcame my lethargy and finally started to gingerly make my way towards to start of the ridge.

Even before reaching the first band of rocks I was hit by the sheer force of the wind. Getting up close with the rocks actually made things a little easier, and I sheltered between them as I had to use hands to scramble up short, easy stretches. It was between these bands that the wind really got you – at one point I stopped and leant into the wind on my pole, waiting for the gust to pass, but it never passed; it just continued at that same fierce rate and I had to continue battling along to reach the next rocky section and some brief respite.

Slowly I made my way up and then the land levelled out a little, the ridge narrowing with a path winding along its edge. I didn’t fancy being that close with this wind blowing into the abyss, so I continued parallel to it, staying a safe distance from the edge in case a gust knocked me off my step.

Soon I saw the small summit cairn perched right on the edge of the crags. I’d reached it in 59 minutes, a minute ahead of my measured time for this part of the route. I made my way over to touch the top then retreated back from the edge. The ridge continued on more grassy terrain, though I could only see a short way ahead.

The map showed a turn in the ridge a few hundred metres ahead, so I took a bearing and paced it to the corner. As I descended to the north-east down a steep, rocky ridge, the wind eased a little and my confidence in the possibility of completing the planned route returned.

A view over Loch Monar emerged beneath the cloud as I approached the next bealach before the steep rise up to Sgurr a Chaorachain and back into the cloud. It was windy here but nowhere near as bad as earlier, so as the ridge widened I made my way towards the low shelter cairn at the summit, which contained the remains of the trig point marked on the map.

There was another decision to make here, whether to continue to the third, more remote Munro of Maoile Lunndaidh or return to the glen for a shorter day. Checking the watch, it was still early in the day, and my timings were on course, so I decided to make a bid to bag this lesser-visited hill.

Things got a little off-piste here, as I had planned a route down the north ridge of Sgurr a Chaorachain, bending east over the Sron na Frianich and down a pathless slope to the Drochaid Mhuilich. A number of route guides suggest continuing from the summit, along the ridge to Bidean an Eoin Deirg before descending steep slopes to this point, but this was no day to stay high for longer than necessary in any case.

The ridge up to Sgurr a Chaorachain in the cloud.

Sgurr a Chaorachain summit – home to a ruined shelter cairn and the remains of a trig point.

A view of Loch Monar from just above the bealach between the two Munros of Sgurr Choinnich and Sgurr a Chaorachain.

My descent was a pleasure, on easy grassy slopes, with plenty of wildflowers to look at on the way and a view into the beautiful hidden valley which contains Lochan Gaineanhach. For me it was a real highlight and my spirits were lifted now as I looked forward to the final climb of the weekend.

I stopped for lunch on a rock at the Drochaid Mhuilich, the cloud now starting to lift off the 1005m Maoile Lunndaidh; perhaps I would even get an unexpected view from a Munro summit on this walk, after all!

The climb starts steeply before easing along a level stretch then a final pull up to Carn nam Fiaclan, marked by a cairn. A few cairns dot the bald plateau and the top had stayed clear, so I made my way over to what is now considered the higher point of Maoile Lunndaidh, a small cairn between the two corries.

The views were impressive from here, particularly looking down the Toll a’ Choin to Loch Monar. I headed to the former summit, marked by a larger cairn (and with the spot height on the OS map) before making my way down the north ridge.

It was going to be quite a big descent from here, followed by a long walk out along the track, but I had the satisfaction of having completed the three Munros after what had seemed this morning an impossible task. I’d assessed the risk of taking on that early ridge and been rewarded with this fabulous end point.

Now I enjoyed the wild walk down the ridge, bearing west lower down to cross at the junction of burns above a gorge. There was rough ground to negotiate now as I headed for the small plantation south-west of Glenuaig Lodge, recalling a mountain bike trip I’d done through here years ago, staying at the little shed-cum-bothy beside the lodge.

The only real obstacle on the way down is crossing the An Crom-allt, which proved straightforward, though it was a relief to finally reach the track after the boggy ground in the lower reaches. My calculations had the walk out along the track from here at two-and-a-half hours, so after a quick bite I started to make my way west, enjoying the views through this beautiful glen as the rain only came on lightly.

It had been a memorable and worthwhile trip, despite the rough night at the bealach. I hadn’t seen a soul since the walk in on Saturday evening as I enjoyed these fine, secluded hills all to myself; a real treat to have such space for body and mind.

Start/finish Forest car park (unsigned) at Craig, north of Achnashellach on the A890; grid reference NH039493