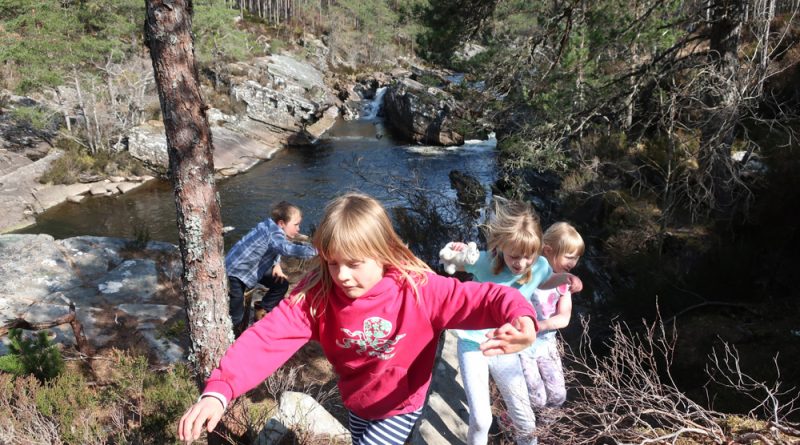 Going for a walk can sound like the most boring thing in the world to a child, so we’re always trying to think of new ways to make it sound more appealing.

This one is practically faultless. All we had to say was that we were going to a really exciting play park in the forest. The fact they had to walk a little over a mile each way to get there and back from the car was barely alluded to.

It also helped that we had arranged to meet some friends at the car park, which is just north of Little Garve off the A835 Ullapool road. One advantage of reaching the park from here is that you don’t clog up the single-track roads through the village as well.

There is a waymarked forestry walk signed from the car park that loops round a stretch of the Black Water river, using two historic bridges to connect the route. The start of the walk is at Silverbridge, once part of an old drovers’ route, and marker posts direct you over the bridge then to the right, down some rocky steps to pass under the more modern – though much less attractive – road bridge that carries the A835 trunk road.

It often strikes me how modern bridges have lost any architectural value compared to their predecessors. At the far end of this walk, the ‘second’ bridge was built in 1752 as part of a military road between Poolewe and Contin. Major William Caulfield’s stone construction is a thing of beauty with arches that hop from rock to rock across the fast-flowing water, almost seeming to be part of the existing landscape.

The path on the east side of the river has been upgraded, so once you are past this initial rougher part of the walk it is well-surfaced, though it does undulate with some steep stretches. Small bridges carry you across a couple of burns that tumble down from the lower slopes of Little Wyvis, which is out of sight beyond the top edge of the forest.

The Black Water itself is an attractive river, with a series of little waterfalls crashing between the bedrock as it makes its way east to join the River Conon before entering the Cromarty Firth.

At some points along the path there are steep drops towards the enticing river, so younger children will need to be supervised, especially if they have a penchant for exploring! There are plenty of places where it is safe to get down to the water’s edge, though, so there is still chance to get off the beaten track a little bit.

For adults, the walk is a nice stroll through peaceful woodland – or it was until we arrived, at least!

Soon you arrive at the road-end beside the Caulfield bridge, where a sign points onwards to Garve and back to Silverbridge.

Keep left at the road to find the entrance to the play park – or you can go right to cross the bridge and find some nice picnic spots among the trees. We didn’t let on that there are also places to park the car around here too, and by now the children were already absorbed by the fantastic play equipment regardless.

The Wyvis Natural Play Park was opened last year and is obviously a hit with youngsters. There is a zip slide, climbing frame, balancing posts, slides and – thankfully for the parents – even a hammock.

With plenty of snacks and a picnic lunch with us, the children were able to play and explore within this beautiful forest setting for hours before we dragged them away, reluctantly.

It is possible to return on the west side of the Black Water to vary the route but, as we had the buggy with us for the baby, we decided to go back by the better-surfaced path we had used to get here.

We feared it might be a struggle to get the children back to the cars but they were still playing on the return journey, seemingly full of energy exploring the forest and the river. There’s a fine viewpoint looking down over the water on the way back and we were also enjoying looking at the spring flowers coming into bloom.

This was already a beautiful spot to come for a walk but the addition of this excellent facility for youngsters – which was done as a community-led project – makes it a great way to encourage them to explore wild places and play safely in the great outdoors.