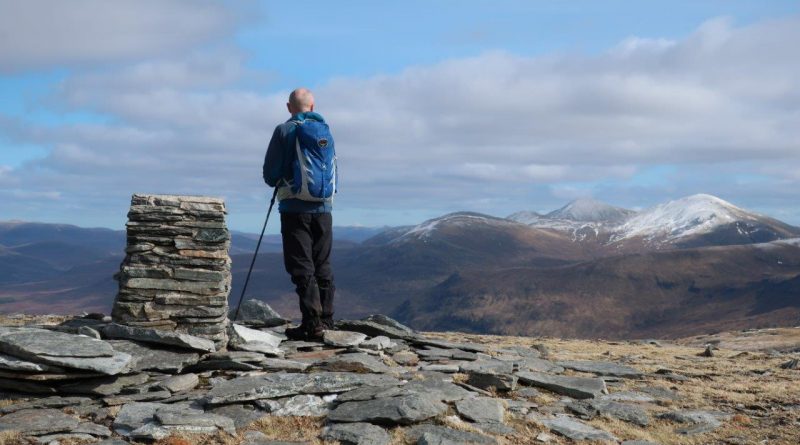 Shortcuts are one thing, but sometimes you are rewarded for taking what initially seems the more roundabout way.

The Corbett of Creag Rainich sits just east of what is often referred to as the “last great wilderness” in Scotland, the Fisherfield and Letterewe Forests.

The mountains here are truly wild and remote, and we had that sense as we climbed the ridge, bound for the 807m summit. Looking around at the glorious sight of mile after mile of rocky ridges, hilltops and glens, we tried to calculate where the nearest road was.

We figured, eventually, that it was the road where we had started, known as Destitution Road because it was built by the starving population during the potato famine of the mid-19th century in return for food.

Looking down at the barren moor across which it travels, it would have been a tremendous and daunting task to undertake.

Today, large parts of the road have been recently resurfaced and our walk started at a corner where two right-of-way signs point down a track, one to Lochluichart and one to Kinlochewe. Informal parking off the road is available a short distance west and directly opposite if that is full.

The track splits before reaching Loch a’ Bhraoin and our route goes right to follow its north shore on a rough 4×4 track. This fairly level track is a good warm-up before any serious climbing starts. Along the way we enjoyed an encounter with a group of whooper swans which were peacefully swimming on the water.

Shortly after the end of the loch, the track deteriorates to a path and reaches Lochivraon, where there is a rather plush looking estate cottage (locked) with a more rustic bothy behind it. Having said that, even this is fairly plush by bothy standards – it has taps (that don’t work) and a toilet (with bucket flush), as well as a kitchen area and good sleeping decks, including some in the loft area. Luxury!

The route passes through two gates then becomes indistinguishable in the quagmire beyond! We moved away from the line of the path, which apparently stays closer to the river, and made our way through energy-sapping terrain to the corner of a fence (shown on the 1:25,000 map).

We seemed to end up at the same point as the path does, though, and found the best place to cross the burn as it drops from twin glens below Teanga nan Càiseachan.

Now the climbing really started as we made our way steeply up the south ridge of the Corbett, aiming for the edge of the cliffs above Loch an Nid in the glen deep below us. The ground was sodden here and we saw newts and frogs, as well as frogspawn, as we splodged through the pathless ground.

As Dave and I plodded up behind Peter, who seemed to have his mountain goat head on today, I made a quip about how we were lucky he hadn’t suggested a shortcut direct to the summit. We caught up with him and we all paused for a drink and a bite to eat – then he suggested exactly that! Too many years of walking with Peter and you know what to expect…

Thankfully we resisted his idea and stuck to the plan. This route takes a longer way to the summit mainly for the views from this south ridge, and we soon found out why. First you get an ever-increasing look at Mullach Coire Mhic Fhearchair, then the impressive slabs of the mighty Sgurr Ban before the dramatic ridge of An Teallach pokes into view.

Higher up, as we really touched the edge, we could see right down to Loch an Nid and we watched for a few magical minutes as a golden eagle rose up on a thermal, its huge wingspan clearly visible even as it touched the clouds. Thank goodness we came the long way.

The next stretch was probably the easiest walking of the day, as we followed the ridge as it bends to the right to clamber through a few rocks, our eyes constantly drawn to the left where An Teallach dominated the nearby skyline.

You reach the true summit of Creag Rainich at its first, most westerly top, just 50 metres or so before the trig point, though there isn’t a huge amount of height difference.

On this beautiful Sunday, our route along the ridge was straightforward to follow, though the terrain is rough and complex which could make it tricky in foul weather. This was no pleasant ridgeline saunter; after heading south-east to Meall Dubh, the long ridge to Meall an t-Sithe was lumpy with heather, peat and rocks intertwining and eating away at our energy reserves.

Our spirits were lifted by more wildlife encounters, though, as a solitary hare warned its peers about our intrusion into its arena, and a pair of ptarmigan also warily moved away as we advanced.

It is possible to descend from the low point of the ridge but we were determined to complete the traverse. The views from this Meall an t-Sithe were impressive, too, but after a tiring descent from the 601m summit, heading approximately south-south-east towards the loch, we were relieved to reach the track again.

A gentle walk back to the road made us grateful for those workers who provided the original route through this wild and wonderful landscape, and allowed us to explore these remote areas of this beautiful country.