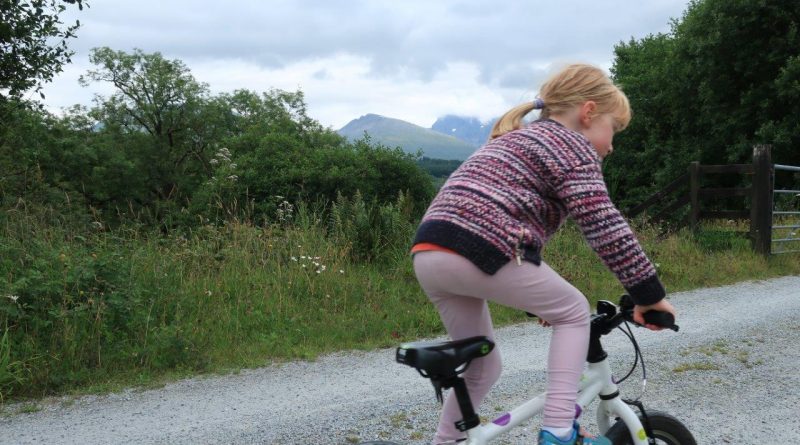 In the shadow of Britain’s highest mountain, it seems somewhat incongruous to find a flat, family-friendly route where you can let the children loose to explore.

Yet this westernmost section of the Great Glen Way is just that. Apart from the small rise at Neptune’s Staircase – where the canal climbs 19m (62ft) in a quarter of a mile – there is little else to think about in terms of hills.

The traffic-free route is popular, especially in summer, but once away from the staircase the crowds do thin out, and you’re left with a slow stream of walkers, backpackers, touring cyclists, runners and mountain bikers to nod “hello” to.

Having recently taken the children to the sea lock at the eastern extremity of the Caledonian Canal at Clachnaharry in Inverness, we wanted to start by the sea at the Fort William end, so we parked at Caol, where there is a small shopping precinct and public toilets.

Feeling the chill for once after a getting too used to the summer heatwave, we nipped into the Blythswood charity shop and bought some jumpers for our daughters Jennifer and Clara, aged five and seven. They were to prove invaluable!

The car park is right next to a quiet road that makes up part of NCN Route 78 and the Great Glen Way, so we joined it and headed right towards the canal. Ahead, you join a cycle path left just before the end of the road.

To the left are views over Loch Linnhe while, to our right, the players were warming up for a top-level shinty match at Kilmallie. The path goes past the pitch, over a narrow bridge then up to meet the towpath.

Heading right here, it’s not far to the road crossing at Banavie. Route 78 is signed right before you get there, following a shared-use path over the railway level crossing and back to meet the main road. There’s no controlled crossing here, which seems a bit crazy given the number of people wanting to cross the A830 Road to the Isles at this point, so carefully go across to reach the bottom of Neptune’s Staircase.

The girls fired up the short sharp hills this early in the ride, then we were away. Off to the right the mesmerising view of Ben Nevis and Carn Mor Dearg could be seen through the trees and breaks in the cloud, which was hanging over the northern face of the higher peak.

Unfortunately it takes more than some mountain views to keep the young ones entertained, so we spent some time playing games and picking wild raspberries along the side of the path as we pedalled.

Eventually we reached the Moy turn-bridge, the last surviving original swing bridge on the whole canal. It was built 198 years ago in 1820 and is still operated by hand today.

There are other points of interest to visit if you can manage a few short detours en route, including the Sheangain Aqueduct and the Loy Aqueduct which allow these waterways to flow under the canal.

Continuing from the Moy Bridge it’s another mile or so to the lock at Gairlochy, our turning point on the route today. Without the children I might have been tempted to return via the B8004 and Commando Memorial before dropping into Spean Bridge and going through Leanachan Forest and Torlundy, just to make a circuit. But for them it was enough of a challenge to do another eight miles back along the canal – which would make it their longest ride to date.

We stopped for a picnic at the tables beside the canal where the Great Glen Way and Route 78 continue via the B-road towards Clunes and onwards to Fort Augustus and Inverness. Clara was inspired to do the whole route one day but we’ve got a way to go before they will be tackling the hillier route to the north.

Heading back down the canal their mum and I were impressed at how well they did, battling against the wind now and starting to feel the cold as the rain started a few miles from the end. Jennifer didn’t even want to stop for a chocolate biscuit because she just wanted to get back and warm up – now that’s dedication for you!

Coffee & cake    The Moorings Cafe, Neptune’s Staircase. No refreshments at Gairlochy or along route.